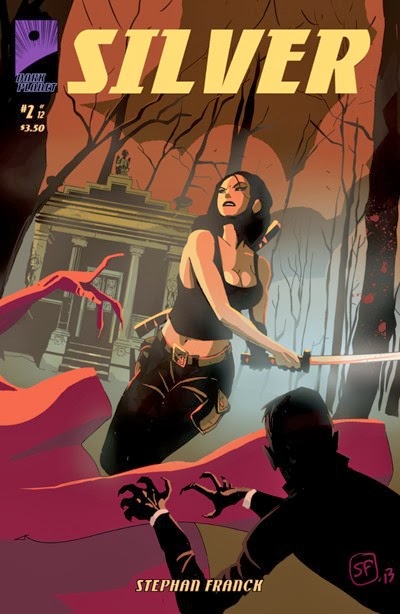 I’m always looking for a comic book that reminds me of why I love comic books so much.  When I find one, as a comic book reviewer, I want to convince other readers to try it, hoping that they will like it – even if they don’t like it as much as I do.

Silver is a new 12-issue miniseries created by writer, director, and animator, Stephan Franck, and published by Dark Planet Comics.  Silver extends the fictional world of writer Bram Stoker, the author of the novel, Dracula (1897), into the 1930s.  The series focuses on a con man who plans to steal silver from the living-dead and his mission to assemble a crew that can help him pull off the biggest heist of the last ten centuries.

The story opened in New York City, 1931 at the Harker Foundation, a creation of the recently deceased Jonathan Harker and his late wife, Wilhelmina “Mina” (Murray) Harker.  There, con man and thief extraordinaire, James Finnigan, crashes an auction of rare silver pieces from the Harkers’ private collection.  Finnigan accidentally stumbles into a crypt where he finds an ancient bar of silver.

As Silver #2 (entitled “Sledge”) opens, Finnigan learns that he did not make quite the clean getaway from the Harker Foundation that he thought he did.  He left something behind, and now his partners, Mullins and Brantley, are none too happy about it.  Finnigan, however, is always a man with a new plan – a bigger and bolder plan... or so he thinks.  Now, he must find a young woman named Rosalynd Sledge, but wait until he learns what her line of work is.

Like The Black Beetle (Dark Horse Comics), Silver is a great new comic book series that harkens back to the classic past of comic books. Silver’s Stephan Franck and The Black Beetle’s Francesco Francavilla remind me of writer/artists and cartoonists such as Steve Ditko, Will Eisner, Harvey Kurtzman and others who mastered the graphic storytelling sensibilities possible with comics.

Whether it is flashy page layouts or weird and imaginative compositions of splash pages or within panels, the masters of the Golden and Silver Ages of comic books made the narrative of sequential art an eye-popping, mind-bending experience.  But the art was not just pretty illustrations, but it was also story, and it conceived, heightened, and embellished the story, character, and setting.

This is Silver, the visual and graphical elements of comics unleashed as a gripping narrative.  Franck’s black and white art might also remind people of Frank Miller’s work in his Sin City comic books.  I hope readers embrace Silver the way they did Sin City.  Silver is the antidote for our comic book reading complacency.

Posted by Leroy Douresseaux at 7:02 AM