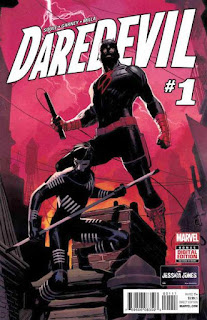 Daredevil is a Marvel Comics superhero created by writer-editor Stan Lee and artist Bill Everett.  The character first appeared in Daredevil #1 (cover dated: April 1964).  Jack Kirby contributed to Daredevil's creation, but to what extent is unknown.  In Daredevil #7, artist Wally Wood created the red uniform by which the character is known into modern times.  Daredevil is Matt Murdock, a vision-impaired attorney who was blinded as a child after being exposed to a radioactive substance.

Frank Miller had an influential run on the Daredevil comic book series, first as an artist and later as the writer and artist.  He made the character popular and also important in the Marvel Universe.  As part of the “All-New, All-Different Marvel,” the Daredevil comic book series is relaunched, and it seems (at least to me) to recall Frank Miller and even the work of those influenced by Miller.  Daredevil is written by Charles Soule; drawn by Ron Garney; colored by Matt Milla; and lettered by Clayton Cowles.

Daredevil #1 opens on the Manhattan Bridge in New York City, where Daredevil is rescuing Billy Li.  He is a witness in a case that Assistant District Attorney Matt Murdock of the New York County District Attorney's Office has put before a grand jury.  The target of that grand jury, the mysterious criminal Tenfingers, wants Li dead and has decided that maybe Murdock should also be killed.  Plus, Daredevil's apprentice, Blindspot, continues to learn.

The story by Charles Soule isn't bad, but it isn't anything special, at least not yet.  It simply takes the classic Daredevil paradigm that connects Matt Murdock's case to a bad guy that Daredevil is pursuing.  I guess this is how it should be, and if done right, can be entertaining.

What I do like is the drawing by Ron Garney and the coloring by Matt Milla.  This combination recalls the black and white, original art of Frank Miller and Klaus Janson and also the pencils, inks, and colors of Klaus Janson – all done by this creative duo during their glorious run on Daredevil.  Garney and Milla's work here also reminds me of Jim Lee's art on the first two issues of Deathblow (a 1990s Wildstorm title), which was – let's face it – a rip off of Frank Miller's art on Sin City.

Garney and Milla's jimmied negative space and faux toning simply looks right for Daredevil.  Like I said earlier, this isn't great, but it makes me want to keep reading for a bit.

Posted by Leroy Douresseaux at 7:18 AM