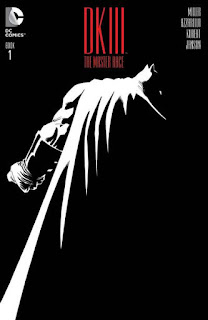 Batman: The Dark Knight Returns (also known simply as The Dark Knight Returns) was a four-issue comic book miniseries starring Batman.  Published by DC Comics in 1986, this prestige-format comic book was written by Frank Miller; drawn by Miller (pencils) and Klaus Janson (inks); colored by Lynn Varley; and lettered by John Costanza, with the book covers drawn by Miller and Varley.

Individually, the books were entitled “The Dark Knight Returns” (Book One); “Dark Knight Triumphant” (Book Two); “Hunt the Dark Knight” (Book Three); and “The Dark Knight Falls” (Book Four).  The series takes place in a future in which Bruce Wayne is 55 and retired from being Batman.  Gotham City's ongoing troubles give Wayne the reason he uses to bring Batman out of retirement, but Batman faces opposition from the city government and the police force.  The series introduces a new Robin, a girl named Carrie Kelley; depicts Batman's final battle with The Joker; and culminates with a confrontation against Superman, which leaves the world thinking that Batman is dead.

Kubert and Janson will be the lead cover artists, but DC is publishing numerous variant covers, about 50 for the issue of DKIII.  Each issue will also include an insert entitled “Dark Knight Universe Presents” drawn by different art teams and written by Miller and Azzarello... apparently.

Dark Knight III: The Master Race #1 opens with the return (once again) of Batman, but this time, the authority in Gotham City is even less welcoming.  Commissioner Yindel and the rest of the Gotham City Police Department are ready to take-down Batman.  Meanwhile, Wonder Woman fights and a legendary small city wants help, while Superman remains in limbo.

Dark Knight III: The Master Race #1 is not as good as Batman: The Dark Knight Returns, Book One.  Let's just get that out of the way.  DKIII colorist Brad Anderson is nowhere nearly as good as DKR colorist, the legendary Lynn Varley (Frank Miller's ex-wife), whose watercolor-like hues were both subtle and vivid.  There is nothing distinguishing about the work of DKIII letterer Clem Robins, certainly not in the way DKR's John Costanza's lettering was so distinctive.

DKIII's art team of Andy Kubert and Klaus Janson capture the spirit and some of the style of DKR's Frank Miller and Janson.  Kubert, however, does not match the imaginative page layouts and awe-inspiring design that Miller gave the original work.

There is a rumor that Frank Miller has contributed relatively little to the storytelling in DKIII.  Word is that DC Comics was developing DKIII independently of Miller and went to him after they'd already made the decision to produce the project.  At the very least, Azzarello is clearly writing the scripts.  It shows.  This is not bad work, but nothing about this suggests the imagination and inventiveness that Frank Miller has brought to all his work:  the good stuff, the bad stuff, and the ambivalent experimental work.  Azzarello, as good as he can be, cannot be like Frank Miller because he is not in Miller's league, no matter how much Jim Lee, Geoff Johns, and the powers at DC Comics pretend he is.

Things could change; I could be delightfully surprised.  But right now Dark Knight III: The Master Race #1 is no more special than any other Batman comic book that is a particularly good read.

Frank Miller actually pencils Dark Knight Universe Presents: The Atom #1, with Klaus Janson inking.  And no, it does not remind me of Batman: The Dark Knight Returns or Frank Miller's run on Daredevil, on which Janson was Miller's most frequent collaborator and partner.

This has potential, but it lacks the spark of any of Miller's best work.


The text is copyright © 2015 Leroy Douresseaux. All Rights Reserved. Contact this site for reprint and syndication rights and fees.


Posted by Leroy Douresseaux at 8:27 PM