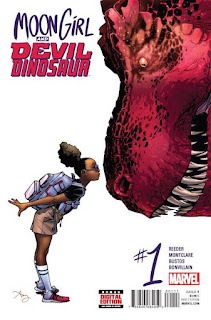 Devil Dinosaur is a Marvel Comics character that first appeared in Devil Dinosaur #1 (cover dated: April 1978).  Created by writer-artist Jack Kirby, Devil Dinosaur is a red Tyrannosaurus Rex, turned red by mutation.  He has a friend and partner, the ape-like Moon Boy, and they live on “Dinosaur World,” a parallel Earth where dinosaurs and primitive humanoid beings live at the same time.

With the launch of the “All-New, All-Different Marvel,” Devil Dinosaur returns in a new comic book series, Moon Girl and Devil Dinosaur.  The series is written by Brandon Montclare and Amy Reeder; drawn by Natacha Bustos; colored by Tamra Bonvillain, and lettered by Travis Lanham.

Moon Girl and Devil Dinosaur #1 (“Repeat After Me”) opens in Lower East Side, Manhattan, New York City.  We meet Lunella Lafayette, girl of science.  Little else in life, but for the scientific, interests her, and we are talking far-off, theoretical, and super-science.  Then, she discovers a glowing stone or orb of some kind.  Meanwhile, in “The Valley of Flame,” events are occurring that will bring new creatures, including a big red dinosaur into Lunella's life.

After only reading one issue of Moon Girl and Devil Dinosaur, I can say with confidence that it is one of the best kids' comics that Marvel Comics has published in a long time.  It is an accessible comic book for kids ages 8 to 12 ('tweens?), but I think that some readers younger than that age group can access this wonderful comic book.

I recently complained that first issues of comic books (especially of ongoing series) tend to be vague, at best a taste of what the series will offer rather than being an actual first chapter of a story arc.  Moon Girl and Devil Dinosaur #1 is an actual first chapter.  Writers Brandon Montclare and Amy Reeder give readers a good glimpse into Lunella Lafayette (“Moon Girl”), who she is, what she wants, her obstacles and conflicts, etc.  They also provide a solid look at the world from which Devil Dinosaur originates, at least enough to make the reader more curious about the Valley of Flame.

The art by Natacha Bustos is the kind of drawing style one might find in alternative and small press comics and also in graphic novels published by book publishers like Scholastic and First Second Books.  It is clean and recalls classic comic book art of the late 1950s and 1960s.  This allows the graphical storytelling to be clear, but also energetic and rife with possibility.  There is a sense of wonder, of mystery, of the unknown in Moon Girl and Devil Dinosaur that modern superhero comic books mostly lack.

Moon Girl and Devil Dinosaur #1 is a break-out first issue, and I can't wait for the second issue.

Posted by Leroy Douresseaux at 6:39 AM