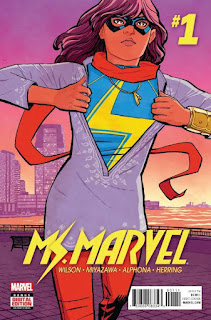 “Super Famous” Part One of Three

Ms. Marvel is a Marvel Comics female superhero character.  The original version of Ms. Marvel was created by writer Gerry Conway and artist John Buscema.  First appearing in Ms. Marvel #1 (cover dated: January 1977), she was meant to be the female counterpart of Marvel's Captain Marvel (who first appeared in 1967), not to be confused with Fawcett Comics' Captain Marvel (which is now owned by DC Comics).

The new Ms. Marvel is Kamala Khan (the fourth character to take the name Ms. Marvel).  Created by Sana Amanat, G. Willow Wilson, and Adrian Alphona, Kamala first appeared in Captain Marvel #17 (cover dated: November 2013).  She is a 16 year-old Pakistani-American from Jersey City, New Jersey.  She idolizes Carol Danvers, the original Ms. Marvel who is now the new Captain Marvel.  Kamala was given her own Ms. Marvel series, which premiered in February 2014, becoming Marvel Comics' first Muslim character to star in her own comic book.

With the dawn of the “All-New, All-Different Marvel Universe” comes the new Ms. Marvel comic book series.  It is written by G. Willow Wilson; drawn by Takeshi Miyazawa and Adrian Alphona, colored by Ian Herring, and lettered by Joe Caramagna.

Ms. Marvel #1 (“Super Famous” Part One of Three) opens with Ms. Marvel participating in superhero activities with her Avengers teammates.  This new life, however, is becoming a problem for Kamala, as she is juggling Avengers duties, school, and online gaming (of course).  Suddenly, Kamala realizes that she has missed something, like the new situation in her friend, Bruno Carrelli's life.  Who is Michaela “Mike” Miller?  And what is “Hope Yards Development,” and what is their connection to Ms. Marvel?

I have thought about it, and I cannot think of another title that might surpass it.  Thus, I feel safe in saying that Ms. Marvel is the best superhero comic book that Marvel Comics is publishing.  It is so different from everything else, and G. Willow Wilson's superb writing makes being different work, while still fitting Ms. Marvel firmly in the Marvel Universe.

Basically Wilson has resurrected what Steve Ditko and Stan Lee did so well in the early years of The Amazing Spider Man:  the merging of the Marvel Comics superhero with teen drama.  The last time someone did a high school superhero comic book this well was Milestone Media's Static, which also recalled the early Spider-Man.  Both Static and Ms. Marvel did it with characters who were ethnically and socially different from 1960s Peter Parker, but Wilson, like Static's writer, proves that Spider-Man's template is universal and could be applied to someone who looks differently and lives in a different place from Peter Parker.  [One could argue that the original Peter Parker/The Amazing Spider-Man is universal because it has been updated and applied to Spider-Man characters that are different form Peter Parker.]

As she did with her first Ms. Marvel series from 2014, Wilson proves that Kamala Kahn can work in the Marvel Universe.  In fact, this series can be a gateway comic book, as The Amazing Spider-Man was over 50 years ago.

Posted by Leroy Douresseaux at 5:08 AM