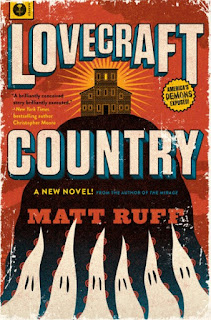 Lovecraft Country is a 2016 fantasy novel from acclaimed cult novelist, Matt Ruff (Fool on the Hill; The Mirage).  Blending fantasy, historical fiction, Lovecraftian horror, and weird fiction, Lovecraft Country focuses on a Black man, his father, his uncle, and a small circle of Black friends and relatives who take on sorcery and Jim Crow-era secret occult societies.

It's 1954.  22-year-old African-American, Atticus Turner, recently received a letter from his estranged father, Montrose Turner.  The letter was a summons for Attitcus, a Korean War Army veteran, to return home to Chicago.  When he arrives at his father's apartment, Atticus learns that Montrose left several days earlier in the company of a young White man.  His destination – a mysterious, small village named Ardham, deep in the Sabbath Kingdom Woods of Devon County, Massachusetts.

Atticus embarks on a road trip to New England to find Montrose.  He is accompanied by his Uncle George Berry, his father's brother and the publisher of The Safe Negro Travel Guide, a periodical that informs African-American travelers which hotels, restaurants, and business serve “Colored” people.  Letitia Dandridge, a childhood friend of Atticus', insists on tagging along.

Shortly after arriving in Ardham, they find Montrose in chains, held prisoner by Samuel Braithwhite, the leader of a secret cabal known as the Order of the Ancient Dawn.  Braithwhite and his fellow conspirators plan to orchestrate a bizarre ritual that requires Atticus' participation.  To escape, Atticus and company will need the help of Braithwhite's son, Caleb, who has his own need of the Turner clan.

Late last year, I saw the movie, American Ultra, which basically failed at the box office and received mixed reviews from film critics.  I, however, loved it, and I had a blast watching it.  American Ultra reminded me of why I watch so many movies:  no matter how many bad or disappointing movies I watch, I will always find movies that thrill me, spark my imagination, inspire me to make a difference, or just make me happy.

Lovecraft Country does all those things.  I am embarrassed to admit that I seem at a lost to completely and accurately describe how much I enjoyed this book and what it did to me.  There are so many shocking and amazing things about Lovecraft Country.

For one thing, author Matt Ruff is a White man.  His depiction of how African-Americans had to live in segregated, racist, Jim Crow America match what other authors have detailed in non-fiction books written by Black and White Americans, who lived in that America or researched it.  What boggles the mind, however, is that a White man captures the indignities heaped on Black people and the dangers they faced during Jim Crow with such intensity that you might think that he is a Black man.

And let's be honest, Jim Crow may have lost a lot of feathers, but he is still alive.  There are quite a few things that Ruff depicts in this book that I have experienced in our allegedly more enlightened times.  Ruff gets it, so much so that he must be a secret Negro, or he has some kind of telepathic connection with a lot of Black folks – past and present.

The copy on the back of the book jacket calls Lovecraft Country a “...brilliant and wondrous work of the imagination....” and “...a devastating kaleidoscopic portrait of racism—the terrifying specter that continues to haunt us today.”  That's the triple-truth Ruth.  Lovecraft Country blends the modern fantasy inventiveness of writers like J.K. Rowling and Neil Gaiman with the inspired pulp fiction imaginations of H.P. Lovecraft and Robert E. Howard and their contemporaries.

Matt Ruff does these writers one better, however.  His fantastic fantasy invention does not leave out the true darkness and terror, and that is the real malevolence of venomous racial hate, bigotry, and prejudice.  By making his characters Black people living under the yoke of oppression, Ruff dares to imagine a world of magic that is as poisonous as it is wondrous.

Readers are always looking for great books.  Some want the kind of novels that are usually called the “best of the year.”  Well, they should travel to Lovecraft Country.


Posted by Leroy Douresseaux at 10:16 AM