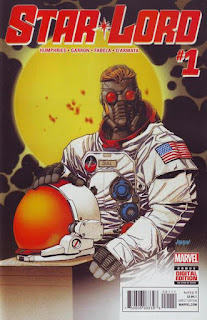 Year One, Chapter One: “Free Falling”

Star-Lord a/k/a Peter Quill is a Marvel Comics superhero and science fiction character.  Star-Lord was created by writer Steve Englehart and artist Steve Gan and first appeared in Marvel Preview #4 (cover dated: January 1976).  Quill is the son of a human mother and an alien father, and he assumes the mantle of Star-Lord, an interplanetary policeman.

After the success of Marvel Studios’ 2014 film, Guardians of the Galaxy, Star-Lord became a star.  Last year, he even got his first solo comic book series, entitled Legendary Star-Lord.  With the arrival of the “All-New, All-Different Marvel” comes another Star-Lord solo series.  The new Star-Lord is also written by Sam Humphries, but this time it is drawn by Javier Garron.  It is colored by Antonio Fabela with Frank D'Armata , and lettered by Joe Caramagna.

Star-Lord #1 (“Free Falling”) opens with a flashback and then moves on to a NASA operations launch facility in Long Beach, California.  It is the site of the Asterion One Program, a project to train young astronauts who will be the first humans to colonize another planet.  There, we find 18-year-old Peter Quill, who is about to fail out of the program.  He isn't a popular guy, but what his distractors don't realize is that young Peter is the one person who can actually figure out how to crack the faster-than-light warp drive on an alien ship.

I read a few issues of Legendary Star-Lord, the previous Star-Lord comic book, and I enjoyed the story and scripting of series writer, Sam Humphries.  He has a knack for this character and plays up Peter Quill's most endearing traits.  Quill is a cocky underdog, a rogue with a heart of gold, and a never-say-die good guy.  Quill is Harrison Ford's two most famous movie roles, Han Solo and Indiana Jones, rolled into one.

In this new series, Humphries goes back to the beginnings of young Peter Quill's star-faring escapades.  This could have been yet another “year one” ripoff story, but Humphries offers Peter Quill's personality from several angles:  the good, the bad, and the cocky.  And every bit of it is engaging.

I don't want to give short-shrift to series artist, Javier Garron, who ably replaces Paco Medina from the previous series.  Garron's storytelling is good, and his graphic style is just right for this sci-fi, outer-space adventure comedy.  I think I'll come back for more, and I recommend this to fans of Guardians of the Galaxy, the comic books and the movie.

Posted by Leroy Douresseaux at 5:08 AM