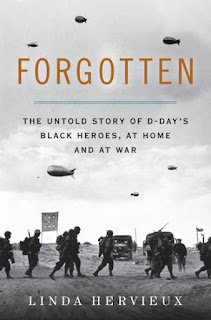 FORGOTTEN: The Untold Story of D-Day's Black Heroes, at Home and at War
HARPERCOLLINS – @HarperCollins

Forgotten: The Untold Story of D-Day's Black Heroes, at Home and at War is a 2015 non-fiction book from author Linda Hervieux.  This World War II-era history book tells the story of an all-black battalion whose crucial contributions on D-Day have gone unrecognized to this day.

What is forgotten is what Forgotten remembers for us.  You did not see it in Steven Spielberg's 1998 Oscar-winning film, Saving Private Ryan, but African-American service men did participate in the Allied invasion of Normandy during World War II.  In the early hours of June 6, 1944 (D-Day), the 320th Barrage Balloon Battalion, a unit of African-American soldiers, landed on the beaches of France (primarily Omaha Beach and Utah Beach).  Their orders were to man a curtain of armed balloons meant to deter enemy aircraft.

Although little was expected of these black man, their bravery and valor in not only maintaining the balloons, but also in rescuing fellow soldiers and in fighting the enemy earned praise from U. S. and Allied military officers and officials – from high to low rank.  They also earned the respect of some of the very White soldiers with whom they could not serve because the U.S. armed forces were segregated even during World War II.

However, the 320th Barrage Balloon Battalion, their exploits and service, were forgotten.  One member of the 320th, Waverly Woodson, would be nominated for the Medal of Honor, but it was an award he would never receive.  Over one million African-Americans served during World War II, but the nation’s highest decoration was not given to black soldiers in World War II, although many were recommended for the award.

Forgotten: The Untold Story of D-Day's Black Heroes, at Home and at War remembers them.  Author Linda Hervieux also chronicles the injustices of Jim Crow America, especially during the 1940s.  The past is brought to life in an extraordinary blend of military and social history.  Forgotten is the book that finally pays tribute to the valor of this all-black battalion; its crucial contributions at D-Day have gone unrecognized to this day, but no longer...  The recognition begins with Forgotten

When I saw director Oliver Stone's 1986 film, Platoon (which won the Oscar as “Best Picture” of 1986), it was the first time I saw a movie that depicted African-American soldiers serving during the Vietnam War as more than just background players.  The only reason I knew that Black soldiers served in Korea was because the assistant principal of my high school was a veteran of Korea.  Occasionally, I saw a Black actor playing a serviceman on the television series, “M.A.S.H.”  Popular media and pop culture and the arts to which I was exposed, especially as child, said very little about Black men serving in Korea.

These slights of Black soldiers during Korea and Vietnam were nothing compared to the uncountable slights against Black servicemen and servicewomen during World War II.  It seems that history practically erased African-Americans from the history of WWII.  In high school, we did not cover WWII – believe it or not.  I did not know that there were African-American pilots during WWII until I first learned that Star Wars creator, George Lucas, had been trying to get a film about those pilots, the “Red Tails” made, as early as the 1990s.  Lucas eventually financed the production, marketing, and distribution of the film himself.

I saw Clint Eastwood's Iwo Jima films, Flags of My Father and Letters from Iwo Jima, but it was afterwards that I learned that Black marines had participated in that battle.  However, Flags of My Father, which focuses on the American side of the battle of Iwo Jima, did not depict African-Americans in the fight.  Director Spike Lee was critical of Eastwood for this omission, but that earned him ire for saying this, but none for Eastwood.

When I read the email in which HarperCollins' marketing department offered review copies of Forgotten, it was the first time I had ever heard of the 320th Barrage Balloon Battalion.  That's my fault.  As an African-American, I should be reading more books about the history of Black folks in America.  I read a lot of journalism, articles, essays, etc. about Black History, but I think I have only read three or four books about Black History or African-American historical figures during the last decade.  For an African-American who calls himself a writer, that is sad.

Well, luckily we have the pluck, skill, talent, and perseverance of Linda Hervieux.  Forgotten: The Untold Story of D-Day's Black Heroes, at Home and at War is an essential book about a pivotal time in the history of the United States:  militarily, politically, socially, and culturally.  It is a fantastic read, and Hervieux should probably write more non-fiction books... on any topic.

This brilliant book will often make you burning angry, but it will also make you proud of a group of men you never knew.  Black servicemen like those in the 320th made an awful, racist country that thought too much of itself look better than it should.  Forgotten: The Untold Story of D-Day's Black Heroes, at Home and at War is an assault on the kind of memory that is nothing more than a column of support for Jim Crow America.  This book is the restoration, not of history, but of America's story.  Now, it is up to us to make sure that neither Forgotten nor the men of the 320th Barrage Balloon Battalion are ever relegated to the remainder bin of history.

Posted by Leroy Douresseaux at 4:49 AM