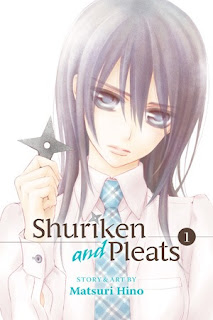 Matsuri Hino created the bestselling manga, Vampire Knight.  Her other popular series include Captive Hearts and MeruPuri.  Her latest series is Shuriken and Pleats.

It focuses on teenager, Mikage Kirio, a skilled ninja.  After the master that she is sworn to protect is killed, Mikage moves to Japan to start a new, peaceful life for herself.  Soon after she arrives, Mikage finds herself fighting to protect a man being attack by two ninja.

Shuriken and Pleats, Vol. 1 (Chapters 1 to 5) finds Mikage totally dedicated to her master, James G. Rod, who has already lost family members to assassins.  Despite her best efforts, James is killed.  In Japan, Mikage hopes to enjoy the life James had planned for her.  Mikage enrolls in high school, where she finds other teenagers, especially Kotaro Suzuki, to be curious.  Soon, however, Mikage is drawn into the machinations of a powerful family, after she saves a man named Mahito Wakashimatsu.

Shuriken and Pleats Volume 1 offers plenty of action involving ninja and also lots of intrigue.  I find it odd that Hino fills the first five chapters of this manga with so much back story, plot twists, plot lines, etc.  It is as if Hino is hurrying to finish this story.  In fact, there were times when I thought that the story was racing to its conclusion because it was a single-volume manga.

I have to admit that I am a little confused about the protagonist or antagonist status of several characters.  Perhaps, that is how Hino intends it, so I hope that Shuriken and Pleats reaches it potential because I do like my ninja manga.

Posted by Leroy Douresseaux at 5:09 AM