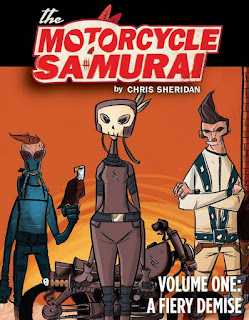 The Motorcycle Samurai is set in an indeterminate post-apocalyptic future.  Riding the desert wastelands on her motorcycle is “The White Bolt.”  She has a coconut-shell like helmet emblazoned with a calavera-like skull covering her head and face, and she has a katana at her side.  As the story opens, the White Bolt has a bounty strapped to her bike's “sissy bar.”  He is Happy Parker, and the White Bolt is taking him back to small town of Trouble to collect a bounty.

Everything in Trouble, however, is... troubled.  Boss Frankie Parker and Pierre Parker (the “Iron King”) have a claim on Happy.  The new sheriff, Roy Keane, wants him to.  There is lots of want when it comes to Happy, but the White Bolt knows that it's all headed to a fiery demise.

When I first saw the cover of The Motorcycle Samurai Book One: A Fiery Demise, I was inclined to dislike it.  I need to stop judging books by their covers unless they are Henry Cavill or Charlize Theron (but I digress...).  Not far into reading the book, I started to find it to be an enjoyable read.

However, many comic book creators use many influences for their pop comics, and The Motorcycle Samurai is a pop confection full of delightful caramels, gum drops, hard candy, jujubes, konpeito, lollipops, marzipan, taffies, etc.  For instance, Sheriff Keane resembles Evel Knievel, and there is a nod to the rocket pack-wearing heroes of the 1930s and 40s.  The entire affair also has the feel of a animated television series destined for Cartoon Network's “Adult Swim” lineup.

I won't call The Motorcycle Samurai a great comic, but its energy makes it a fun read.  You know, a fun comic is often better than a comic book trying to be literature.  The dynamic graphic design, vivid colors, and inventive elements makes The Motorcycle Samurai pure comics, created by a writer-artist who is grabbing at the visual and graphical possibilities of the medium.


Posted by Leroy Douresseaux at 8:57 AM