Review: GUARDIANS OF THE GALAXY #1 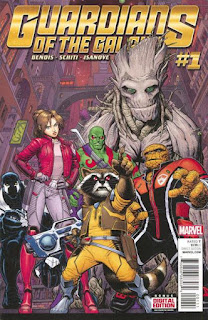 The Guardians of the Galaxy are a Marvel Comics superhero team.  Created by writer Arnold Drake and artist Gene Colan, the team first appeared in Marvel Super-Heroes #18 (cover dated: January 1969).  However, the best known version of the Guardians of the Galaxy first appeared in 2007.  Created by writers Dan Abnett and Andy Lanning, the team's initial roster included Star-Lord, Rocket Raccoon, Quasar, Adam Warlock, Gamora, Drax the Destroyer, and Groot.

Star-Lord, Rocket Raccoon, Gamora, Drax the Destroyer, and Groot would go on to be the stars of Marvel Studios' surprise 2014 hit film, Guardians of the Galaxy.  With the launch of the “All-New, All-Different Marvel,” there is a new Guardians of the Galaxy comic book.  The series is written by Brian Michael Bendis; drawn by Valerio Schiti; colored by Richard Isanove; and lettered by Cory Petit.

Guardians of the Galaxy #1 features the team of Kitty Pryde as Star-Lord, Drax, Rocket Raccoon, Groot, The Thing, and Venom.  A run-in with the Chitauri leaves the group with a mysterious item and no knowledge of how powerful or dangerous that object is.  Meanwhile, on Planet Spartax, Peter Quill, the original Star-Lord, finds his new life as King to be an utter bore.  He does not realize that excitement is bound to return in many ways...

I last read Guardians of the Galaxy during the story arc, “The Trial of Jean Grey,” a crossover event with All-New X-Men.  Then, I didn't find a reason to keep reading.  I am not sure that this first issue gives me a reason to keep reading this new series, now.  It is not as if this new Guardians of the Galaxy #1 is awful or anything; besides, I am a fan of writer Brian Michael Bendis.  New series artist Valerio Schiti delivers some pretty art and solid storytelling.

I guess it is just that I got this first issue because I am trying to read as many #1 issues in the “All-New, All-Different Marvel” as I can.  I don't plan on reading as many #2 issues, I can tell you that, dear reader.  This is not a bad comic book... I reiterate.  I think fans of the modern incarnation of the Guardians of the Galaxy will enjoy this comic book.  It is just that if money is tight for you, dear reader, this comic book is not worth $3.99 if you are not a fan.

Posted by Leroy Douresseaux at 9:40 AM