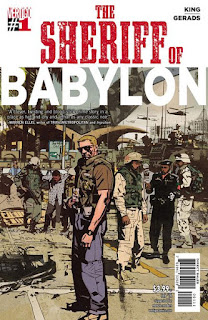 THE SHERIFF OF BABYLON No. 1
DC COMICS/Vertigo – @DCComics

The Sheriff of Babylon is a new comic book series from writer Tom King and artist Mitch Gerads.  Published by DC Comics' imprint, Vertigo, this eight-issue miniseries opens in Baghdad, Iraq in February 2004.  That is 10 months after the fall of Baghdad in the wake of the United States-led coalition's invasion of Iraq.

The Sheriff of Babylon #1 introduces Christopher, a former Florida police officer who believes that his failure to follow a lead led to a catastrophe.  Now in the U.S. Army, Chris trains men in Baghdad to serve in the new Iraqi police force (because someone thought it was a great idea to disband the “old” Iraqi police force).

When one of his trainees, Ali Al Fahar, turns up dead, Chris is expected to deal with the situation.  For help, Chris calls on Sofia, a former Iraqi exile who has returned to Baghdad in order to take control of the city's criminal underworld.

I am intrigued by the premise of The Sheriff of Babylon, and I am aware of that premise because I obtained a copy of the Vertigo 2015 Preview (which was provided free to customers at comic book shops).  In fact, that preview has more about The Sheriff of Babylon's characters and premise in two paragraphs than in the entirety of first issue of the actual comic book itself.

I know that this is the comic book world in which we live.  As a friend of mine always says, first issues are now teasers in which you do not find out about the series so much as you get a taste of it.  So, if The Sheriff of Babylon #1 is a taste, it is, as I said mere sentences ago, an intriguing taste.

Tom King's Baghdad circa 2004 is every bit the disaster news reporting, documentary films, and television media claimed it was.  No one seems to know what is going on.  Everyone is ready to pass a problem along to someone else.  There is a vast network of people who might be able to help you, but there is certainly always someone who needs your help.

As far as the art by Mitch Gerads, it is standard Vertigo fare, or at least standard as far as comics that depict military situations and criminal settings go.  I generally like such graphic styles.  That said, the storytelling is... well, intriguing.  I plan on trying at least one more issue.


Posted by Leroy Douresseaux at 3:06 PM