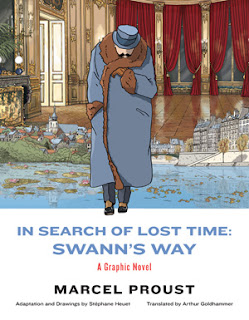 Stéphane Heuet is a French comics artist, who is known for his work in Franco-Belgian comics, which are called bandes dessinées (or “BD”).  Two decades ago, Heuet made a big leap in his career, which was also a huge risk, and this career-changing decision was connected to Marcel Proust.

Valentin Louis Georges Eugène Marcel Proust, best known as Marcel Proust (1871-1922), was a  French novelist, critic, and essayist.  He is considered one of the greatest authors of all time, and his prominent work is À la recherche du temps perdu (In Search of Lost Time).  This monumental novel was published in seven parts between 1913 and 1927.

The novel first gained fame in English under the title, Remembrance of Things Past.  This lengthy work has a theme of involuntary memory, and it follows the narrator, a middle-aged writer, as he recalls his past, the people he knew, and the places his visited.

In Search of Lost Time: Swann's Way opens with “Combray,” in which the narrator, an aspiring writer, evokes the village in which he grew up, Combray.  This opening section includes the famous “episode of the madeleine.”  While visiting his mother, the narrator has tea with her and eats a madeleine, a small pastry in the shape of a cockle shell.  The taste of the pastry causes the narrator’s memories to return to his boyhood (the “involuntary memory”).

The second part, “Swann in Love,” tells the story of the romance between the aristocratic Charles Swann and Odette de Crecy, a prostitute.  Swann's infatuation with Odette causes him much torment, especially once he comes to believe that she cannot stand his presence and is also having an affair with the Comte de Forcheville.  Although he comes to believe that Odette is beneath his station, Swann cannot stop thinking about her and wanting her.

The third part, “Place Names: The Name,” details the narrator’s idealized boyhood love for Charles and Mme (Odette) Swann's daughter, Gilberte.  This part also deals with the narrator's preference for the manner of women's fashion, make-up, and hair as it was when he was a boy in the past, as he compares it to the way things are in the present, now that he is an adult.

While researching Marcel Proust, Stephane Heuet, and this graphic novel, I found a New York Times article from 1998 about the controversy that ensued in France after the release of Heuet's first In Search of Lost Time graphic novel, Combray.  I don't know why I found myself surprised by the controversy, as the French are so open-minded...

Anyway, it took me a long time to read this (in addition to the fact that, at one point, I misplaced my reader's copy).  I am assuming that all the dialogue (word balloons) and exposition (caption boxes) that Heuet uses in his comics adaptation come directly from Proust's original text.  Proust's winding prose reads as if someone took Shakespeare and stuck every line together to form one incredibly long run-on sentence with little to no punctuation.  Yet Proust, at least in this comic book, is not abstract.  The language is meant to be evocative, and I found that certain words go together to form phrases which in turn are meant to evoke involuntary memories in my mind.  It is as if I were remembering something that not only did I not experience, but may also not even be real.

And I like that.  I think Heuet's adaptation works best if the reader can unravel the layers of the text.  Some words are mere flights of fantasy, while others are metaphorical.  Some deal with memory and are, therefore, highly descriptive.  In “Swann in Love” I found myself having to reread portions of the text to discover when the story was focusing on the matter at hand:  character, personality, relationship, conflict, and narrative.  I think the translation of Heuet's original French text into English by Arthur Goldhammer is likely the best a translation of this can be.  It is reader-friendly, but emphasizes the beauty of the prose.

It is also easy to get lost in Stephane Heuet's beautiful art.  His “clean line” (or “clear line”) style recalls the work of Tintin creator, Hergé, and it gives the story a sense of wonder and of adventure.  That makes this journey into the narrator's memory a joyful trip.  I was never bored; I was always curious about where this story was taking me.  Honestly, In Search of Lost Time: Swann's Way is not the easiest read, but it is a remarkable book, and the map of Paris and illustrated Proust family tree that comes with this version of the book helps.

Posted by Leroy Douresseaux at 9:42 AM