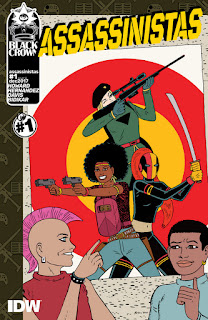 Dominic Price and the Semester Abroad – Part 1 of 6

Assassinistas is a new comic book from writer Tini Howard (The Skeptics; Power Rangers: Pink) and artist Gilbert Hernandez (Love and Rockets).  The series focuses on a gay college student, his mother who is a mercenary, and his boyfriend who joins them on a mission.

Assassinistas #1 introduces Octavia “Red October” Price, Charlotte “Scarlet” La Costa, and Rosalyn “Blood” Diamond.  Once upon a time, they were assassins who were like three badass action movie chicks.  Now, Octavia has a college-age son, Dominic Price, and she needs to pay his tuition.  A reunion with one of her former colleagues, however, messes up her plans.  Now, she needs Dominic to help her, but she does not know that his boyfriend, Taylor, wants in on the action-movie fun.

Anyone who has read enough of my reviews or have read them long enough knows that I am a huge fan of the long-running alternative comic book series, Love and Rockets, and that I frequently praise its  creators, brothers Gilbert and Jaime Hernandez, as if they were my own children.  So I have to be honest and let you know, dear readers, that I rarely dislike comics produced by the the brothers, also known as Los Bros.

Assassinistas #1 seems like the work of a singular vision.  Hernandez has produced droll and bizarre takes on violent sub-genres (monster movies, crime fiction, lurid romances) that are unique, but that are also infectious reads.  Whereas Darwyn Cooke produced highly-polished comics that were neo-classical takes on venerable genres and styles, Tini Howard seems to have an off-beat sensibility, engaging storytelling genres in observance of modern dilemmas.  Gilbert also has an off-beat sensibility, and his approach to storytelling often feels timeless, regardless of genre.

That is close enough.  Howard and Hernandez seem like a perfect team, and Assassinistas, over its run, may prove that its first issue was indeed a hint of good things to come.


The text is copyright © 2018 Leroy Douresseaux. All Rights Reserved. Contact this blog for syndication rights and fees.

Posted by Leroy Douresseaux at 5:29 PM