Review: THE DIVIDED STATES OF HYSTERIA #1 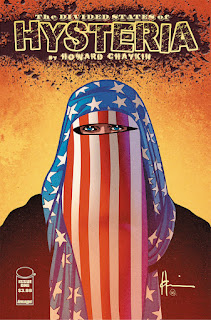 The Divided States of Hysteria is a new comic book series from renowned comic book creator, Howard Chaykin (American Flagg!, Midnight of the Soul).  Chaykin's collaborators include colorist Jesus Aburtov and Chaykin's longtime letterer, Ken Bruzenak.  Published by Image Comics, The Divided States of Hysteria is set in an America that is being destabilized by catastrophic terrorists attacks.

The Divided States of Hysteria #1 opens one month after the elected President of the United States and most of the cabinet were assassinated in an aborted coup d'etat.  The narrative focuses in on Washington D.C. where we meet an ambitious, ladder-climbing, CIA field officer, Frank Villa.  Frank is trying to warn his superiors, including the new President, that a worst-case terrorist attack on D.C. is imminent, but the decision makers would like to analyze the data on Frank's claims before they make big decisions.  Meanwhile, four mass killers: Henry John Noone, Christopher Michael Silver, Paul Evan Berg, and Cesare John Nacamulli, are arrested.

In his afterword to the first issue, Howard Chaykin says (basically) that he thought his new comic book, The Divided States of Hysteria, was dark, but that, in the year since he first announced it, real-world America had turned darker.  Chaykin is obviously referencing a number of events, in particularly that celebrity/public figure/businessman Donald Trump is now President of the United States.  He blames both sides of the left/right political divide.  I tend to blame the fact that the levers of power in this country are mostly attainable through a rigged election system, but let's not talk about that now.

I cannot give The Divided States of Hysteria a grade rating at this time, but I am interested in it.  It is the philosophical, if not spiritual, heir to Chaykin's seminal mid-1980s comic book series, American Flagg!  The Divided States of Hysteria #1 suggests that this series will be an epic narrative told through multiple characters in multiple settings and involving multiple plot lines – like American Flagg!

To me, graphic and page design create not so much a sense of hysteria as a sense of things being out of control and careening down hill, without breaks.  That is why I'm intrigued at the possibilities of The Divided States of Hysteria, which could be an excellent comic book full of socio-political commentary, satire, and/or criticism, like the great American Flagg!  Or it can end up ambitious but obtuse like Chester Brown's Underwater.

Posted by Leroy Douresseaux at 5:59 PM