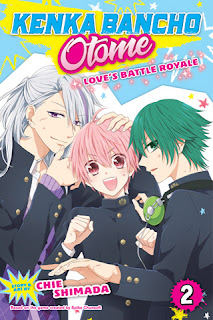 A series of video games that debuted a decade ago for the Playstation Portable, Kenka Banchou follows the efforts of a male “bancho” (delinquent) to beat up other delinquents.  Manga creator, Chie Shimada, created a manga, entitled Kenka Bancho Otome: Girl Beats Boys, based on the game, but it focused on a female character as the lead.

VIZ Media is publishing that manga under the title, Kenka Bancho Otome: Love's Battle Royale, which focuses on Hinako Nakayama, an orphaned girl.  She is about to start her first day at the all-girls school, Kotobuki Girls' High School, when she accidentally bumps into a teen boy whose face resembles her face.  His name is Hikaru Onigashima, and he is her long-lost twin.  Hikaru demands that because Hinako has hurt him, she must disguise herself to look like him and take his place at his new school, Shishiku Academy, an all-boys school of delinquents – who fight all the time!

Kenka Bancho Otome: Love's Battle Royale, Vol. 2 (Chapters 5 to 8) finds Hinako-as-Hikaru the boss of the first and second year classes.  However, she is in for a surprise when she meets Houou Onigashima, the real Hikaru's older brother, and that means she also has a big brother.

Meanwhile, Hinako is so happy to finally have friends.  She grows closer to Totomaru Minowa, Rintaro Kira, Takayuki Konparu, and Yuta Mirako.  Totomaru and Kira are secretly rivals for Hinako's affections, but it may all end when one of her friends is being forced to leave the school

The Kenka Bancho Otome manga has a familiar premise, as it reminds me of the recent shojo manga, So Cute it Hurts!!, from mangaka Go Ikeyamada.  Kenka Bancho Otome, however, will not run as long at the latter manga did.

Kenka Bancho Otome: Love's Battle Royale Graphic Novel Volume 2 is the final volume of this series.  It is a nice volume as it solidifies the relationship dynamics so that readers can recognize Hinako's immediate circle of friends.  I don't know if there will be more of this series, but this second volume makes me think that there is more story to tell.  In the meantime, I recommend this to fans of gender-switch manga.

Posted by Leroy Douresseaux at 5:29 PM