Book Review: THE WORD IS MURDER 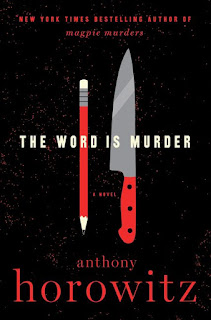 The Word is Murder is a 2018 detective novel from bestselling author, Anthony Horowitz (The House of Silk, Moriarty: A Novel).  Horowitz is also known for creating the acclaimed British television series, “Foyle's War.”  In this new novel, Horowitz unites a fictional version of himself with a taciturn former London detective in a kind of crazy Holmes-Watson-like team.

The Word is Murder opens in London on a bright, spring morning.  Wealthy Londoner, Diana Cowper, arrives at Cornwallis & Sons, a funeral home, to plan her funeral.  Six hours later, Diana is found dead, strangled with a curtain cord in her own home.  Unable to solve the case, London police turn to a “consulting detective,” disgraced detective inspector (DI) Daniel Hawthorne, a brilliant, but eccentric investigator who rubs people the wrong way with his arrogance and insults.

For this case, Hawthorne wants his activities documented, and he needs a ghost writer.  He turns to Anthony Horowitz, bestselling author and creator of acclaimed British television series, such as “Foyle's War.”  Horowitz had previously hired Hawthorne as a consult on his TV series, but he does not like the pushy former cop.

Reluctantly, Horowitz agrees to follow Hawthorne, from one place to another, as he investigates Mrs. Cowper's murder.  Thus, Horowitz soon finds himself at the center of a story he cannot control and is forced to silently follow the brusque, temperamental, and annoying Hawthorne.  Complicating matters further, the case of Diana Cowper's murder is filled with twists and turns, which do prove to be irresistible to Horowitz.  But this unusual partnership will place Horowitz in great peril, working with a man who may have his own dark secrets.

I read Anthony Horowitz's 2014 mystery, Moriarty: A Novel.  I thought the novel was brilliantly written, but I hated the resolution.  I gave Moriarty a grade of “B,” although I probably would have given it at least an “A,” if the ending had not irritated me so much.

I think that The Word is Murder is also brilliantly written and structured, but I absolutely love this book's final three chapters.  There are so many twists and turns and more twists and turns, and I do want to be careful about spoiling anything.  However, I can attest to the fact that this novel is a hugely entertaining piece of meta-fiction in which Horowitz creates a captivating fictional version of himself, a kind of modern-day Dr. Watson.  The Horowitz of The Word is Murder seems like a perfectly reasonable and relate-able man.  As the first-person narrator and storyteller, he is a delightful guiding companion for readers.

As a Sherlock Holmes-like character, Daniel Hawthorne is also fascinating, especially because Horowitz does not give us much about the personal Hawthorne.  Of course, we can only rely on fictional Horowitz to tell us about Hawthorne.  This detective may pry into everyone's business, but he does not like people to pry into his.  So I found myself desperate to know more about Hawthorne simply because he is worth discovering.

As a work of crime fiction and as detective fiction, The Word is Murder is playful and experimental, even when it is being brutal and shockingly violent.  I would not mind a sequel, but I think that a sequel might ruin the original spirit of The Word is Murder.  Let's not worry about that, however; let us enjoy a truly original mystery novel.


Posted by Leroy Douresseaux at 6:21 PM