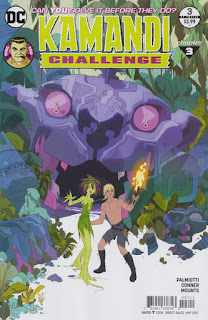 “Bug in Your Ear”

Kamandi, The Last Boy on Earth was a comic book series created by Jack Kirby and published by DC Comics.  Running from 1972 to 1978, the series starred Kamandi, a teenaged boy in a post-apocalyptic future.  In this time, humans have been reduced back to savagery in a world ruled by intelligent, highly evolved animals.

Kamandi, The Last Boy on Earth #1 (cover dated: October 1972) opens some time after a huge event called “The Great Disaster,” which wiped out human civilization.  In “Earth A.D.” (After Disaster), many animals have become humanoid, bipedal, and sentient, and also possess the power of speech. These newly intelligent animal species have equipped themselves with weapons and technology salvaged from the ruins of human civilization and are constantly at war in a struggle for territory.

The world of Kamandi returns in the DC Comics miniseries, The Kamandi Challenge, bringing together 14 teams of writers and artists.  Each issue will end with an cliffhanger.  The next creative team will resolve that cliffhanger left behind by the previous creative team, before creating their own story and cliffhanger, which the next creative team after them will have to resolve... and so on.  The third issue of The Kamandi Challenge is written by Jimmy Palmiotti; drawn by Amanda Conner; colored by Paul Mounts; and lettered by Clem Robins.

The Kamandi Challenge #3 (“Bug in Your Ear”) opens after Kamandi escaped from Tiger City, but now, he is plunging to his death.  He is rescued by two “Savage Bats” and taken to the “God Watchers.”  Kamandi may start to regret being rescued because the God Watchers think that he is a messenger from their god.

I have been a fan of many of the stories that Jimmy Palmiotti has written, so I am saying good things about his work here with some favoritism.  Artist Amanda Conner and colorist Paul Mounts are a dream team.  Her drawings are always filled with nice background and environmental details that offer something new upon second and third viewings.  Mounts rich colors are simply eye candy, as they shimmer and even pop off the page.

Jack Kirby had a seemingly boundless imagination, and it will be hard for the creative teams in this series to come close to Kirby's vision.  At least, The Kamandi Challenge #3 shows some inventiveness, and it is the kind of issue that will keep me reading this series.

Posted by Leroy Douresseaux at 5:26 PM