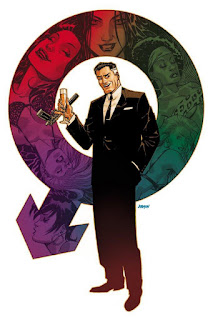 Jimmy's Bastards is a new comic book series from writer Garth Ennis and artist Russ Braun.  Ennis is known for the seminal DC Comics/Vertigo title, Preacher, and for his work on such titles as The Punisher and his controversial creator-owned title, The Boys.  Braun is known for his work on Vertigo titles like Fables, Fairest, and Jack of Fables.  On Jimmy's Bastards, John Kalisz is colorist and Rob Steen is letterer.

Jimmy's Bastards #1 (“Get Daddy”) introduces James “Jimmy” Regent, who is Great Britain's number one super-spy.  He has all the intrigue and adventure he can handle, and he has a license to shoot whomever he likes.  Jimmy can also perform whatever sexual acts he wishes on a veritable legion of beautiful and willing women.  His new partner, Nancy McEwan, isn't sold on his charms, though.  It turns out that she isn't the only one not so impressed with Jimmy.  Their is a new threat mounting against him and it is more personal than he can imagine.

I think that the central premise of Jimmy's Bastards is ripe with possibilities, but I don't like Jimmy Regent.  I think that he is supposed to be unlikable, but to me, he barely registers as a character.  Obviously, we will learn more about Jimmy in future issues (I hope).  I think that Nancy McEwan has more potential than Jimmy, but there will probably be some violence done to her in the end, ruining her full development.

I recommend Jimmy's Bastards to Garth Ennis fans, especially because I think the adversaries in this series will yield great fun.  Obviously, the second issue will reveal even more about this narrative than the first issue does.

[This comic book includes a six-page preview of Unholy Grail by Cullen Bunn and Miriko Colak.]

Posted by Leroy Douresseaux at 5:20 PM