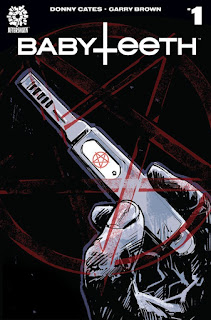 Babyteeth is a new comic book series from writer Donny Cates and artist Garry Brown.  Their collaborators are Mark Englert on colors and Taylor Esposito on letters.  Published by AfterShock Comics, this series will focus on the young woman who gives birth to the Anti-Christ, a child that will eventually break down the barriers between the earthly and demonic planes.

Babyteeth #1 (“Mother of God”) opens in a darkened exterior.  Using a smart phone, young Sadie Ritter records a story to tell her baby, which takes us back one year prior.  In Salt Lake City, Utah, 16-year-old Sadie is trying to hide her pregnancy from her classmates.  Her sister, the bad-ass Heather, knows about the bundle of joy and has to make some people back up off her little sister.  When Sadie's contractions start, some weird crap starts happening, too, including Sadie's belief that she may be dead!

All I can say is that I am intrigued by Babyteeth.  Writer/co-creator Donny Cates is hot as he comes off two Image Comics, God Country and Redneck.  I get the feeling that Babyteeth will be somewhat funny, maybe a black comedy or a satire or both.  It is hard to tell how dark or violent it will be, but there is something in Garry Brown's angular compositions and matter-of-fact storytelling that makes Babyteeth seem promising.  It is almost as if Brown's art and graphical storytelling is saying to us, “Oh, you are going to want to see the rest of this!”

And for now, I do want to see more of this.

[This comic book includes the following extras and back-matter:

There are four-pages of the behind-the-scenes process of producing Babyteeth #1, from script to art to coloring and lettering.

This is a six-page preview of upcoming AfterShock Comics title, Unholy Grail E1 by Cullen Bunn and Mirko Colak.]

Posted by Leroy Douresseaux at 5:18 PM