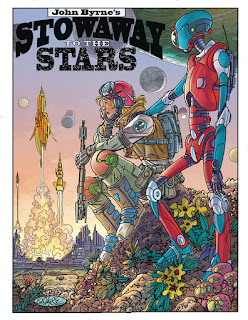 John Byrne's Stowaway to the Stars the adult coloring book not only included Byrne's art, but also a story written by Byrne.  This is the tale of a spunky teenaged girl, of robots, of aliens, and of space travel.  This month (June 2018) IDW published Stowaway to the Stars as a paperback, graphic album, which is similar to the paperback graphic novel format that many American comic book publishers used throughout the 1980s and into the 1990s.  The trim size was 8.5” x 11” or around that.

This new version of John Byrne's Stowaway to the Stars features 23 illustrations, each one in a two-page spread.  On the left side is a section of text, written by Byrne, that is part of a larger story.  On the right side is a Byrne Stowaway illustration presented in full-color, executed by Leonard O'Grady.

The text of John Byrne's Stowaway to the Stars is a short, short story, a science fiction tale that evokes classic sci-fi adventure tales of children escaping into the far-flung reaches of outer space.  In this case, the child is 14-year-old Eliza Smith.  On her home world, Capella 4-G (one of Earth's oldest colonies), Eliza lives close enough to a spaceport to watch one hundred ships come and go everyday.  Now, Eliza is taking control of her fate, but will this stowaway to the stars live to regret her decision far, far away from home.

First, John Byrne's Stowaway to the Stars the graphic album (or illustrated book?) is beautiful.  Obviously, John Byrne is known for his comic book storytelling.  His work on X-Men/Uncanny X-Men with writer Chris Claremont is literally legendary, and truthfully, every X-Men comic book Marvel has published since the last Byrne-Claremont's issue (Uncanny X-Men #143) lives in the shadow of Byrne-Claremont's work.  Byrne revitalized Fantastic Four, and he basically reinvented Superman for DC Comics in 1986.

Still, for illustrative work – on comic books, magazines, and book covers; for portfolios; and on art commissioned by fans, Byrne has produced some of his most beautiful and distinctive work.  I think John Byrne's Stowaway to the Stars contains some of Byrne's best art ever.  The line work here reveals Byrne as a master draftsman, and the composition informs the viewer that each illustration tells a story and that it is not just a drawing.

As for the story, which IDW has sometimes described as “story fragments,” John Byrne's Stowaway to the Stars recalls juvenile science fiction, the kids-in-space sub-genre probably best exemplified by Robert A. Heinlein's “juvenile” novels (like Farmer in the Sky).  Part of me loves the dystopias of Philip K. Dick and the near-future worlds of books like A Clockwork Orange and Fahrenheit 451.  Another part of me wants to be “Lost in Space,” whether it be with the Robinsons or aboard the “Astra” of Kenta Shinohara.  Eliza's adventure recalls a sense of wonder, of adventure, and of mystery evoked by the promise and potential of space exploration.

You don't have to live far, far away on an Earth colony to wonder what it would be like to be in space.  You can sit in tall grass on Earth and look up at the stars and feel almost exactly as Eliza feels.  John Byrne's Stowaway to the Stars may be a fragment, but even in its smallness it reaches for something that is probably universal.  I want to read it again.

Posted by Leroy Douresseaux at 6:21 PM