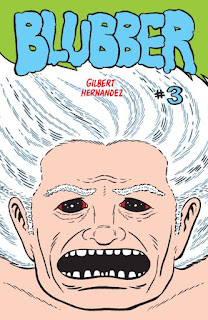 He is the cartoonist, comic book creator, and graphic novelist best known for being one-half of the duo known as “Los Bros.” Gilbert Hernandez and his brother, Jaime Hernandez, form the Eisner Award (Will Eisner Comics Industry Awards) winning team that has produced the seminal, alternative comic book series, Love and Rockets (Fantagraphics Books), for 35 years.

This black and white comic book series offers short stories and vignettes featuring a cast of misfits, monsters, and anthropomorphic types.  Beto also presents his usual mix of bizarre characters, strange stories, and outlandish sex and sexual acts, all hallmarks of his comix going back to the beginning of his public work.

I gave a rave reviews to Blubber issues #1 and #2.  Unfortunately, Blubber #3 does not live up to its predecessors.  It does have its moments, such as the “Blubberoo” story and the strange goings-on at the “Blubber Club.”  However, the Janx story, “Circle of Life,” meanders rather than flow freely.  It has a dream like quality, but parts of it don't seem to belong, as if Beto took sections from four other stories and sewed them together for “Circle of Life.”

The “Root 66” strip is a gag, cute in its juvenile nature.  The Pupusi one-pager is like a nice after-dinner chocolate.  I may be a little down on Blubber #3, but there is enough good raunch and depravity to get me ready for #4

Posted by Leroy Douresseaux at 5:23 PM