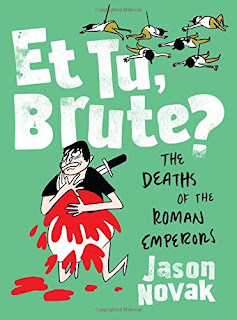 Et Tu, Brute? The Deaths of the Roman Emperors is a book of cartoons from cartoonist, Jason Novak, whose work has appeared in such periodicals and journals as Harper's, The New Yorker, and the Paris Review, to name a few.  Et Tu, Brute? is a work of history told via cartoons, and it compiles the deaths of all the Roman emperors, from the establishment of the Roman Empire (27 BC) to the fall of Rome and the end of the “Western Empire” (476 AD).

Did you know that Julius Caesar was not the first emperor of Rome.  Caesar had proclaimed himself provisional dictator, but he was murdered before the role of Roman emperor was codified.  Still, Caesar's brutal fate and his ghost seemed to have haunted the role of emperor, as the first emperor, Augustus, who was Caesar's adopted nephew, Octavian, would learn.  When the Roman Republic became an empire (27 BC), it got an emperor, and suddenly Rome, what it was – body and soul – became embodied in a single frail and imperfect human being.

And many of those emperors found their lives snuffed out, often murdered by colleagues and fellow citizens, the way Julius Caesar was.  See Nero stabbing himself in the throat.  Witness Tiberius smothered in his sleep by his successor.  Cartoon Caligula is killed by his own praetorian guard in a single cartoon illustration.

Et Tu, Brute? The Deaths of the Roman Emperors chronicles the death by murder, disease, mutiny, war, etc., and by unknown causes of every emperor.  It begins with Augustus being poisoned by his wife in 14 A.D. to the mysterious fate of Romulus Augustus after the fall of Rome in 476 A.D. and the end of the Rome's “Western Empire.”  Et Tu, Brute? carries readers on a bloody romp through the first five centuries of the Roman Empire, but it is a journey illustrated in over ninety 5.6” × 7.3” cartoons, each one with a wry and wicked sense of humor in depicting the demise of an emperor and occasionally a would-be-emperor.

I am a huge fan of the kind of humor and political cartoons found in magazines, newspapers, and other periodicals.  I especially love the singe-panel vignettes and single-page illustrations found in men's magazines such as Playboy, Penthouse, Hustler, and the Humorama line.  If I had to pick a favorite periodical for cartoons it would be the venerable magazine, The New Yorker, and my favorite cartoonist is the late and eternally great Charles Addams, one of the grand old masters of The New Yorker.

In Et Tu, Brute? The Deaths of the Roman Emperors, James Novak's cartoons recall the work of a author and illustrator who plied his trade in a vein similar to Addams, the late master, Edward Gorey.  Novak's drawing and graphic style are more about sensibility rather than about composition, in this case a macabre sensibility.  Novak is at once mercurial and then, representational.  His compositions erratically balance sparse line work and brushstrokes that slap ink around as if by a drunken cartoonist's hand.  And that works for his subject matter, particularly in Et Tu, Brute?

This book is both witty and morbid, but there is power in the way Novak draws these cartoons, in what he presents to his readers.  He conveys that fate is fickle and life and existence – if they can be embodied or personified – have a twisted sense of humor.  Dear reader, you don't have to know much about the Roman Empire to like this book.  You can simply enjoy Et Tu, Brute? The Deaths of the Roman Emperors because cartoon history is a great way to learn a little history and because this cartoon history is a macabre blast to read.

Posted by Leroy Douresseaux at 5:03 PM