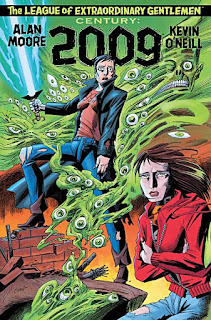 The League of Extraordinary Gentlemen created by Kevin O'Neill

A three-graphic novel set, Century finds the League as a new team in a new century.  Century #1 “1910” and Century #2 “1969” focuses on the Leagues attempt to stop occultist Oliver Haddo from realizing his dream of creating an anti-Christ called “the Moonchild,” which would bring about an apocalypse.  The League's surviving members, the three immortals:  Orlando/Roland (the eternal warrior), Mina Murray (Count Dracula's shorty), and Allan Quatermain (great White B'wana and British adventurer) believe they stopped Haddo's plans after a battle in Hyde Park and in the “Blazing World” during the year 1969...

The League of Extraordinary Gentlemen: Century #3 “2009” (“Let It Come Down”) finds Orlando doing what he does best.  He is living eternally and slaughtering eternally, this time in Q'Mar, where a war of attrition drags into a fifth year of blood and devastation.  Orlando is back in London when she gets a sudden visit from Prospero, Duke of Milan, who informs her that Haddo's Moonchild has already been born and that the apocalypse is nigh.  Now, Orlando must reform the League in time to stop this anti-Christ, but where are the last two surviving members?  They may be immortals, but one is a homeless heroin addict and the other is currently a resident of a mental institution.

I like Alan Moore's dark, famous, and acclaimed comics of the 1980s.  Watchmen is a legendary comic book to many American comic book creators, fans, and industry types.  V for Vendetta is a bold and idiosyncratic vision (misunderstood by many of its readers and admirers).

Still, I prefer Moore’s more surreal and slyly humorous comics, such as The League of Extraordinary Gentlemen.  More so, I think that LoEG, like Watchmen and Moore and Eddie Campbell's From Hell, is an extraordinary work because it is the creation of a comic book writing genius and comic book drawing genius.  I may be one of the few people who think that Kevin O'Neill is a genius, but his striking graphics and his visual sense of composing a story via a comic book page are matched by only a few comic book artists over the last three or four decades.  He can convey pathos, drama, humor, satire, parody, and surrealism within a single page and, on occasion, within a single panel.  Also, O'Neill's comics often trade in both the mundane and the scatological.

So that's my review.  Moore was first declared a genius over 30 years ago, and I am now officially declaring O'Neill a genius.  The League of Extraordinary Gentlemen: Century #3 “2009” is a great comic book because it is the work of genius times two.  Everything about it is unconventional, although its structure is conventional comics, and the story is full of convention – by reference and allusion.

The final battle between the League and the Moonchild is neither climatic nor anti-climatic.  It is something different, waiting for a different kind of heroine to take it in another direction, even if that direction has been taken before her.  I wish there were The League of Extraordinary Gentlemen: Century #4.

Posted by Leroy Douresseaux at 5:22 PM