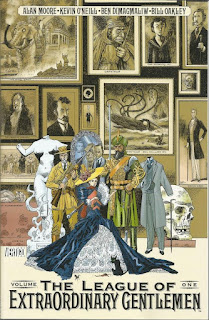 THE LEAGUE OF EXTRAORDINARY GENTLEMEN, VOL. I
DC COMICS/Vertigo – @DCComics

The story takes place in 1898 and is set in a fictional world where all of the characters from Victorian literature are real and coexist, and the events, adventures, and drama depicted in that literature actually occurred.  Alan Moore borrowed LoEG's main characters and plot elements primarily from the works of writers Sir Arthur Conan Doyle, Robert Louis Stevenson, Bram Stoker, Jules Verne, and H.G. Wells.

The League of Extraordinary Gentlemen, Volume One opens in 1898.  It is one year after Mina Murray's encounter with the vampire, Dracula, and Mina has divorced her husband and now works for the British government.  She meets with MI5 agent, Campion Bond.  [Alan Moore means for Campion to be the grandfather of Ian Fleming's James Bond, although for intellectual property reasons, James Bond is not mentioned].  Bond gives Mina the task of gathering certain men for the task force known as the League of Extraordinary Gentlemen.  Campion is vague about MI5's leader, the mysterious “M,” whom Mina assumes is Mycroft Holmes, the brother of Sherlock Holmes.

After Mina gathers her extraordinary gentlemen and the LoEG is formed, Bond gives them their mission.  He wants the League to recover a stolen supply of “Cavorite,” a man-made element that can power and levitate heavier-than-air machines.  The thief is the crime lord of the “East End” of London, a mysterious figure known as “The Doctor” (a stand-in for the fictional character, Fu Manchu, which is not in the public domain).  While “The Doctor” has indeed stolen the Cavorite, the League does not realize that there is more to their mission than recovering a stolen item and that there is a bigger conspiracy against London than one crime lord.

The people who only know The League of Extraordinary Gentlemen through that mediocre 2003 film that was loosely adapted from the comic book are unlucky.  I think many of those people would love Alan Moore and Kevin O'Neill's fantastic original comic book series.  I have already praised Moore and O'Neill as geniuses in a review of a later LoEG comic book.  For Moore: I praised his inventive concept, his imaginative story, and his ingenious execution of the narrative.  For O'Neill, I praised his original illustrative style, his eye-popping graphics, and his stunning graphic design.

What new readers will discover is how funny this first LoEG comic book is, especially compared to the fake wittiness of the hapless film adaptation.  My recent re-reading is the first time I have read the original series since it original publication.  I did not remember its sense of humor, so I was delighted to discover it.  It was like finding something new.

Whether you look for literary references or whether you want to enjoy its unique spin on classic fiction, LoEG seems to always offer something new to discover.  I noticed I was finding new things when I reread certain pages during this second reading.  The League of Extraordinary Gentlemen, Volume One has not so much stood the test of time as it has proved to be timeless.  I now consider it a comic book that I would share with anyone inclined to read comic books.


Posted by Leroy Douresseaux at 6:17 PM