DC CINEMA - From THR:   A retired federal judge who oversaw one of the three investigations into the misconduct on the set of Joss Whedon's "Justice League" says that Warner Bros. executive Walter Hamada did not interfere with her investigation, despite allegations otherwise from actor Ray Fisher, who played "Cyborg" in the film.

MILESTONE - From DCBlog:   DC Comics has announced the creative teams for the upcoming titles in its Milestone revival.

VIZ MEDIA - From YahooNews:  Everything you need to know about "Demon Slayer," the manga, the animated TV series, and the record breaking film.

DC CINEMA - From TheWrap:  In an exclusive story, "The Wrap" is reported that Warner Bros. and DC Films are prepping a movie starring the character "Blue Beetle."  The film will focus on the Jaime Reyes version of the character making this Warner's first superhero film featuring a Latino character.

MANGA - From BleedingCool:  Kodansha announces four new digital titles for April 2021" "Girlfriend, Girlfriend;" "Nina the Starry Bride;" "The Honey-blood Beauty & Her Vampire;" and "And Yet, You Are So Sweet."

DC CINEMA - From WeGotThisCovered:   There is supposedly a "mind-blowing" cameo in "Zack Snyder's Justice League."

MARVEL TV - From WeGotThisCovered:  "X-Men: The Animated Series" (1992-97) has proved to be popular since it was added to the Disney+ streaming service.  Now, there are talks of reviving the series.

DC CINEMA - From WeGotThisCovered:   The DCEU (Warner Bros.' movies based on DC Comics characters) has found its "Supergirl."  She is Sasha Calle, and she will reportedly make her debut in the DCEU film, "Flash."

SPAWN - From BleedingCool:   Image Comics' President Todd McFarlane announced his plan to create a greater multi-character, interconnected comic book universe based around his Spawn comic. His stated goal is to establish a shared fictional universe over time in the vein of what the other comic industry giants, Marvel, and DC Comics, have accomplished with their comic book universes.

From BleedingCool:  Todd McFarlane talks about "King Spawn #1," which is due in August.

From BleedingCool:  Todd McFarlane talks about "Gunslinger Spawn #," which is due in October.

EN MEMORIAM - From 2000AD:   British comic book writer, Si Spencer, has died Wed., Feb. 17th, 2021.  He worked on such titles as "Crisis" and "Judge Dredd Megazine." In the U.S., he wrote such comics as "Vinyl Undergound" and "Hellblazer: City of Demons."  Spencer also wrote for British television, including a stint on "EastEnders."

COMICS TO TV - From Deadline:   Tim Burton is developing a live-action TV series based on "The Addams Family," and it will focus on precocious daughter, "Wednesday Addams."  Netflix will stream this young adult series.

MARVEL - From BleedingCool:  With Marvel Studios' "Shang-Chi and the Legend of the Ten Rings" set to debut in July, Marvel Comics launches the "Shang-Chi" comic book.

STAR WARS - From BleedingCool:  Marvel is to publish "Star Wars: War Of The Bounty Hunters," a new series written by Charles Soule that goes back to Soule's original pitch document for writing Star Wars comic books.

DC COMICS 4 SALE - From BleedingCool:  A number of industry individuals have also heard about DC Comics being for sale.

From BleedingCool:   Crazy rumor - could very wealthy DC Comics fans be looking to buy the comics side of DC Comics?

JOSS WHEDON - From YahooEntertainment:   Joss Whedon: A timeline of allegations against the 'Buffy the Vampire Slayer' creator

MANGA TO ANIME - From BleedingCool:   There is a trailer for Season 2 of the "Demon Slayer" anime, which is of course based on the ultra-hot manga series.  The second season is due later in 2021.

DC CINEMA - From YouTube:   There is a new trailer (Sun., Feb. 14th) for the film now known as "Zack Snyder's Justice League."

EN MEMORIAM - From AVPress:   Notorious Underground Comics artist, S. Clay Wilson, died at the age of 79, Sunday, February 7, 2021.  He is best remembered as an early contributors to "Zap Comix" and for his character, "The Checkered Demon."  He will also be remembered for his highly-detailed, violent and sexually explicit art.

EN MEMORIAM - From Locus:   Science fiction and fantasy artist and illustrator, Rowena Morrill, has died at the age of 76, Thursday, February 11, 2021.  Morrill painted covers for books by such science fiction luminaries as Philip K. Dick, Harry Harrison, Ellen Kushner, H.P. Lovecraft, and Anne McCaffrey, to name a few.  Her work was collected in two art books, "The Fantastic Art of Rowena" (1983) and "The Art of Rowena" (2000).  Morrill was nominated for the "Hugo Award for professional artist" four times in the 1980s. She was awarded the "World Fantasy Award for life achievement" in 2020.

MILESTONE - From BleedingCool:   DC Comics has delayed the relaunch of Milestone Comics (Milestone Media) until April 2021 (from February).

DC COMICS - From CBR:   The long-running Batman comic book series, "Batman: Legends of the Dark Knight" (1989-2007), will return as a digital first, weekly anthology series, beginning in May 2021.

COMICS - From EW:  This "Entertainment Weekly" interview with HBO/HBO Max chief, Casey Bloys, may be of interest to comic book fans.

COMICS - From WKYC:  An artist turns torn and tattered comic books into portraits of celebrities and popular characters.

HEROES REBORN - From BleedingCool:   Marvel's "Heroes Reborn" title, "Magneto & The Mutant Force" will offer an alternate take on the X-Men.

IMAGE COMICS - From CBR:  Rodney Barnes, the writer behind the great horror comic, "Killadelphia," has revealed that the is working on a horror comic with hip-hop icon, rapper Xzibit, which is due this year.

From CBR:  Rodney Barnes also revealed that the Tony Award-winning musical, Hamilton," is one of his influences for the creation of "Killadelphia."

MARVEL - From TheNewYorker:   Who really created the Marvel Universe, asks this article from "The New Yorker."

MANGA - From ScreenRant:  "Stitch" from the classic Disney animated feature, "Lilo & Stitch," is headed to manga.  TOKYOPOP will debut "Stitch and the Samurai Vol. 1" in May 2021.

MARVEL - From BleedingCool:  This May, Doctor Strange reforms "The Defenders."

SONY MARVEL U - From WeGotThisCovered:   Rumors say that actor Keanu Reeves has been offered the role of Spider-Man villain, Kraven the Hunter," possibly to play him in a solo movie, a la "Venom."

SALES - From BleedingCool:  Adult graphic novel sales in bookstores double in a year.

BOOM! STUDIOS - From TheBeat:   BOOM! Studios announced the creative teams for all four issues of Jim Henson’s The Storyteller: Tricksters, the first issue of which will be available at your local comic shop on March 17th, 2021 – including new art from issue #3!

FANTAGRAPHICS - From Print:  Acclaimed cartoonist and comics creator, Gary Panter, is profiled in conjunction with his new book, "Crashpad."

MARVEL - From BleedingCool:  "Heroes Reborn: Young Squadron #1" imagines Miles Morales as "Falcon" instead of as Spider-Man, and Kamala Kahn as "Girl Power" instead of as Ms. Marvel.

DC COMICS - From GamesRadar:   DC Comics has announced "Let Them Live," an anthology series that will publish previously unpublished DC Comics stories.  The series will debut as a digital comic on the "DC Infinite" digital reading service.

COMICS TO TV - From Deadline:   "The Walking Dead's" extended 10th season will be comprised of six episodes.  The first will debut Feb. 21st on the streaming service, AMC+, and debut on cable net, AMC, ON Feb. 28th.

COMICS TO TV - From Deadline:  The Nowlan Family Trust, which oversees the "Buck Rogers" Estate, has sent a cease and desist letter to Legendary Entertainment over its plan for a George Clooney TV reboot of the Buck Rogers property.  The trust reportedly has a deal with David Ellison's Skydance Productions to "exploit" the property.

MARVEL - From ScreenRant:   Wu-Tang Clan unites with Deadpool in "Deadpool #10.

FANTAGRAPHICS - From THR:   Ed Pisko, creator of "Hip-Hop Family Tree" and "X-Men: Grand Design," has a new project.  It is "Red Room," a 12-issue shared universe anthology that Fantagraphics Books will publish.

MARVEL - From GamesRadar:   Marvel gives new hints about "Heroes Reborn" which may have links to "Avengers: Endgame."

From THR:  Actor Jeffrey Wright who will appear in "The Batman" will star in a podcast, "Batman: The Audio Adventures" from HBO Max.

From ScreenRant:  The Death Note manga is coming back with a brand new collected volume, "Death Note Short Stories," that will publish the March 2020 one-shot for the first time. The volume is due Feb. 4th, 2021.

Posted by Leroy Douresseaux at 1:39 PM

#IReadsYou Movie Review: DOCTOR STRANGE in the Multiverse of Madness 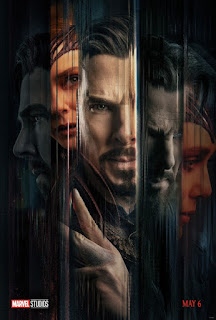