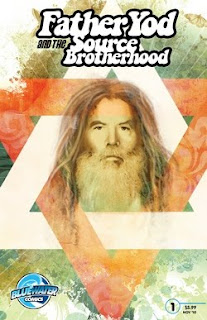 Isis Aquarian lived the Age of Aquarius to the hilt: She, along with Father Yod and the Source family, took sex, drugs and rock and roll and added one missing ingredient: spirit.

This October, Bluewater Productions will debut its latest nonfiction comic book, The Source, detailing the lives and times led by the spiritual followers of YaHoWa!, one of the best known communes of the 1970s. Isis Aquarian, who co-write the comic along with writer Ryan Burton, was one of 14 wives of Father Yod, the spiritual leader of the Brotherhood of the Source. She also served, as she says, as temple keeper, high priestess and family archivist.

Today, Isis' goal is to share the story of the Brotherhood of the Source, which also ran the first vegetarian restaurant in the country, Source on the Sunset Strip, with a new generation of readers. The Bluewater Comic is just one part of this plan.

“We were beautiful, wealthy, kind people who ran one of the most famous restaurants on Sunset Strip,” Isis said. “We had long hair. We wore robes. We were not hippies or yogi, even though most of us had come into the family that way. We evolved to a mystery school. We took sex, drugs rock-and-roll and added spirit to it.”

Artist Faricio Bohrer handled the layouts and penciling duties on the comic. His challenge was to match his art with the non-linear nature of the comic's storytelling.

Writer Burton said that working with Isis, and learning the history of the Brotherhood of the Source, was a powerful experience.

“The entire comic is this organic, magical thing,” Burton said. “Everything Isis' first-hnd, living, breathing experiences to the mind-bending layouts Faricio has created. It's non-linear, it plays with imagery and there's sincerity in every image. I think people will appreciate that we've created this charming little guide to what the Source Family was all about. I'm lucky and humbled to say that I was a part of it.”

The Source will retail for $3.99, and will be available at comic shops across the country. Readers can also pre-order copies through online retailers.

“This is a completely different kind of comic book for us,” said Darren G. Davis, founder and publisher of Bluewater Productions. “I think readers might be shocked at just how different. I'm happy, though, to bring the story of the Source to a generation of readers that may have little knowledge of what the '70s was all about.”

Bluewater Productions publishes a wide variety of comic books, from superhero fare such as the 10th Muse to biography comics. The company has received coverage in the mainstream press for comics featuring celebrities and politicians such as Barack Obama, Michelle Obama, Michael Jackson, Robert Pattinson and, coming soon, Justin Bieber.

Posted by Leroy Douresseaux at 8:16 PM