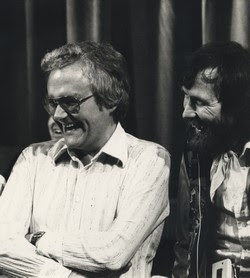 
NEVER-PRODUCED, FEATURE-LENGTH SCRIPT FROM THE JIM HENSON COMPANY ARCHIVES TO BE ADAPTED INTO A HARDCOVER

Seeking to ignite imaginations and spark curiosity, The Jim Henson Company and Archaia announced they will publish an original graphic novel hardcover based on A TALE OF SAND, a never-before-seen screenplay written by Jim Henson and his friend and longtime collaborator Jerry Juhl that the two had worked on for many years in the 1960s. The project will be undertaken under the approval and supervision of The Jim Henson Company’s CEO Lisa Henson, and will be guided through the production process by Archaia Editor-in Chief Stephen Christy.

“Finding something like this in the archives of The Henson Company was like finding the creative equivalent of a Rosetta Stone,” said Christy. “This script is a peek into the early creative mind of Jim Henson, and is a unique vision that is so different from his work with The Muppets, The Dark Crystal, Labyrinth, or any of his other later works. Archaia is proud, honored and extremely excited to team with The Jim Henson Company to present this work by Jim Henson as a fitting tribute to his legacy and as a fantastic treat for his fans all over the world.”

A Tale of Sand, a dark, existential feature-length screenplay that built off of ideas Jim Henson had been developing around the time he produced his Academy Award-nominated short film “Timepiece,” tells the story of a young man who hears, “Run, boy… run!” as he is kicked out of a dusty town in the middle of the desert. There’s nothing but sand in every direction, but run he does, with only a rucksack of odds-and-ends to his name, as he embarks on an oddball journey.

“A Tale of Sand was a very personal project for my father,” said Lisa Henson. “This hasn’t been seen by anyone outside of this company, and I feel very lucky that we can present his vision for this story in graphic novel format with Archaia, giving fans a glimpse at a piece of his creative legacy, and I hope they enjoy this look into his early creative process.”

Archaia and The Jim Henson Company entered into a multi-year publishing partnership in 2009 for Archaia to publish comics and graphic novels based on classic franchises like “Fraggle Rock,” “The Dark Crystal” and “Labyrinth,” as well as new, co-branded original properties.

A Tale of Sand is tentatively scheduled to debut in late summer 2011.


About The Jim Henson Company
The Jim Henson Company has remained an established leader in family entertainment for over 50 years and is recognized worldwide as an innovator in puppetry, animatronics and digital animation. Best known as creators of the world famous Muppets, Henson has received over 50 Emmy Awards and nine Grammy Awards. Recent credits include the Emmy®-nominated “Sid the Science Kid,” “Dinosaur Train,” “Wilson & Ditch: Digging America” and “Pajanimals.” Features include “The Dark Crystal,” “Labyrinth,” “MirrorMask,” and “Unstable Fables” and television productions include “Fraggle Rock” and the sci-fi cult series “Farscape.”

With additional locations in New York and London, The Jim Henson Company is headquartered in Los Angeles on the historic Charlie Chaplin lot, complete with soundstage and postproduction facilities. Independently owned and operated by the five adult children of founder Jim Henson, the Company is also home to Jim Henson’s Creature Shop™, a pre-eminent character-building and visual effects group with international film, television and advertising clients, as well as Henson Recording Studios, one of the music industry’s top recording facilities known for its world-class blend of state-of-the-art and vintage equipment.

For more information on Archaia or any Archaia titles please visit www.Archaia.com. Archaia can also be found on Facebook (facebook.com/archaiacomics) and Twitter (twitter.com/archaiacomics).
Posted by Leroy Douresseaux at 8:49 AM