"27" is New Miniseries from Image Comics 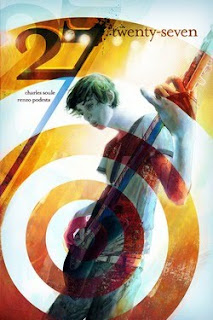 BURNING OUT AND FADING AWAY

A rockstar tries to survive his talent in 27, a new miniseries from Image Comics

Hendrix, Cobain, Joplin, Morrison. All died at age 27. In 27, and all-new miniseries from Image Comics and Shadowline, a gifted rock musician fights to make it to his 28th birthday.

This four-issue series is written by Charles Soule (Strongman), drawn by the brilliant Renzo Podesta (Hard Drive, Howard Lovecraft and the Frozen Kingdom), and features gorgeous covers by W. Scott Forbes (FORGETLESS). It will be published in the larger Golden Age format.

In 27, the "27 Club" admits only the most brilliant musicians and artists -- and kills them dead in their 27th year. Will Garland is a famous rock guitarist, secretly unable to play for months due to a neurological disorder afflicting his left hand. He's also 27. With mad scientists, long dead rock legends and cosmic entities in his way, can he make it to 28?


Image Comics is a comic book and graphic novel publisher founded in 1992 by a collective of best-selling artists. Image has since gone on to become one of the largest comics publishers in the United States. Image currently has five partners: Robert Kirkman, Erik Larsen, Todd McFarlane, Marc Silvestri and Jim Valentino. It consists of five major houses: Todd McFarlane Productions, Top Cow Productions, Shadowline, Skybound and Image Central. Image publishes comics and graphic novels in nearly every genre, sub-genre, and style imaginable. It offers science fiction, romance, horror, crime fiction, historical fiction, humor and more by the finest artists and writers working in the medium today. For more information, visit www.imagecomics.com.
Posted by Leroy Douresseaux at 11:52 AM