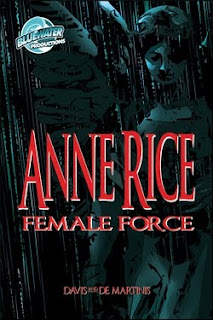 Anne Rice, whose literary vampire novels injected undead life to the genre and spawned a legion of imitators, is now, herself, the protagonist of a comic book biography by Bluewater Productions out this week. Female Force: Anne Rice, currently available at comic book shops and various online outlets, follows the popular novelist from her formative years in her beloved New Orleans through the tragedies that influenced the creation of her most popular novels and her fervent rediscovery of Catholicism.

“Intensely compelling and beautifully drawn, the Anne Rice biography shares the heart-wrenching pain and raw beauty of one of the world’s most compelling authors. This is a keeper!” said reviewer Anne Elizabeth, Columnist on Comics, Manga, and Graphic Novels for RT BOOK Reviews Magazine.

Rice has recently been in the news publicly distancing herself from the Catholic Church. Although the issue does not cover this recent event, it does encapsulate her entire career up to that point.

“What I think fans will enjoy is the format of Rice being interviewed by a vampire as a nod to her seminal novel Interview with a Vampire,” said Davis. “This allows the Rice to provide added insight to her own story. Accordingly the vampire narrator adds his own spin as well.”

Female Force offers a broad examination of strong and influential women who are shaping modern history
and culture.

The monthly comic book series, launched earlier this year, has drawn considerable media attention, including features on CNN, MSNBC, Fox News, and Live with Regis and Kelly. It has also been featured in such periodicals as People Magazine, Los Angeles Times, Chicago Tribune, USA Today and thousands of blogs and other media outlets.

The suggested retail price (SRP) for the upcoming trade paperback is $3.99 for the 22-page title.