I Reads You Review: BAKUMAN。 VOL. 1 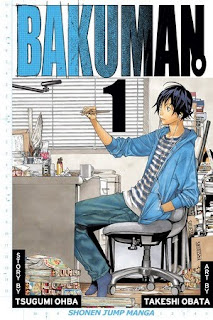 Bakuman。is a manga from writer Tsugumi Ohba and Takeshi Obata, the creators of the popular and controversial manga, Death Note. In this new series, Akita Takagi, an aspiring writer, convinces an artistically inclined classmate, Moritaka Mashiro, to join him in creating manga. Moritaka enjoys drawing for fun, and though he resists at first, he goes along because, in the past, he has considered becoming a manga-ka (manga creator).

In Bakuman, Vol. 1, Takagi encourages Mashiro to contact, Miho Azuki, a classmate with whom he is infatuated. She shocks both of them by making a special promise to Mashiro. Mashiro even learns that Miho has a connection to his late uncle, Nobuhiro Mashiro, who was a manga creator.

Bakuman is a rather strange manga. It has many elements of a teen manga: it is partially set at a high school; young love and courtship are a big part of the story; and there is some parental drama. However, Bakuman, thus far, seems to be mostly about the art and craft of creating popular entertainment. It is also an industry manga, a behind the scenes look at working in the world of manga publishing.

As a shonen manga (comics for teen boys), Bakuman is standard material, but as a story about two youngsters creating manga, Bakuman is brilliant just because it makes everything about creating a manga and getting it sold so fascinating. It is sharply written by Tsugumi Ohba, who is good at creating believable, engaging characters. The art by Takeshi Obata (who is also the artist on the manga Hikaru no Go and RalΩGrad) draws it in a style that uses heavily detailed compositions to make every panel look like it could be a real, living environment or space.

Because Bakuman is from the team behind Death Note, I am curious to see where this series goes and how it develops. I don’t care for the series’ domestic, teen life side, but Bakuman seems to promise to be something so different, and it is worth finding out where it goes, at least for a few volumes.

Posted by Leroy Douresseaux at 2:33 PM