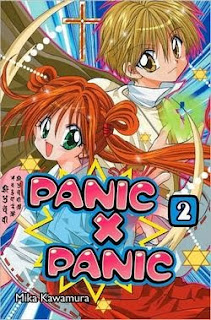 Panic X Panic, a manga from Mika Kawamura, focuses on childhood friends and rivals, Mitsuki Kamishiro and Kakeru Kuon. Mitsuki’s family operates a shrine and Kakeru’s family runs a church across the street from the Kamishiro Shrine. The two discover that they are descended from a group called the “Holy Workers,” who banished demons back to their world and sealed them there 2000 years ago.

The demons returned, and when one attacked Mitsuki, Kakeru came to her rescue. Mitsuki realizes that they both have magical powers, but they must work together to save the world from the demon invasion, even while bickering like an old married couple.

In Panic X Panic, Vol. 2, Mitsuki and Kakeru travel back in time and discover the misunderstanding that led to their rivalry. Then, the androgynous demon, Yō Kuroha, makes a move to possess Kakeru and neutralize his power. Now, the clueless Mitsuki has to discover the conspiracy in time to stop a new demon invasion.

I liked the first volume of Panic X Panic, and I like the second volume even more. So I was disappointed to discover that this is the final volume of the series.

Although Mitsuki and Kakeru are the co-protagonists in this series, the story is told through Mitsuki’s eyes. Creator Mika Kawamura does a good job of helping the reader feel Mitsuki’s sense of wonder, her confusion and fear, and her lack of understanding about the supernatural that has suddenly come into her life. It can also be frustrating to follow a character that can be so clueless, but it is also fun rooting for her as she confronts dilemmas with pluck and imagination.

Readers who enjoy manga like St. Dragon Girl, another shojo manga about a magical girl, will also enjoy the delightful Panic X Panic. Del Rey Manga rates it as being for teens, but this series is appropriate for younger readers, who may enjoy it more.

Posted by Leroy Douresseaux at 10:52 AM