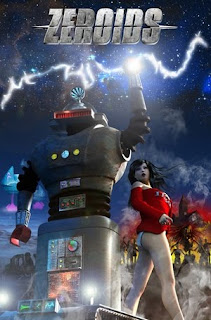 It’s true what they say: they just don’t make ‘em like they used to. After spending decades in space, five incredible robots, the ZEROIDS, return to Earth during humanity’s darkest hour. Their mission: to defend our world from a race of insidious alien energy vampires. Armed with extraterrestrial technology acquired among the stars, the Zeroids are all that stand between mankind and an alien-engineered zombiegeddon…but before they can help us, the Zeroids must first enlist the help of a U.S. Air Force ace and a beautiful Cornell sorority co-ed. The beloved toy series comes to life in this exciting new post-apocalyptic adventure series! Cover artist Chris Short takes a break from his NEWSWEEK gig to do a cool cover for us!

(Covers A & B available separately)

**RETAILER INCENTIVE: for every 5 copies ordered (any combination of A&B covers) you will receive one free “Color Close Up” Chris Short variant edition!**

**RETAILER INCENTIVE: for every 5 copies ordered (any combination of A&B covers), you can purchase one “Space” variant= $3.99 retail.**
Posted by Leroy Douresseaux at 8:12 PM