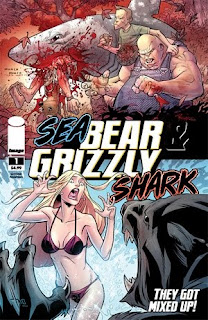 STAY OUT OF THE WOODS... AND THE WATER

Just when you thought it was safe to wander through the woods and go skinny dipping at the beach, Jason Howard (THE ASTOUNDING WOLF-MAN) and Ryan Ottley (INVINCIBLE) showed you otherwise with the sold out SEA BEAR & GRIZZLY SHARK.

To reinforce the fear of mixed up and violent wildlife, Image Comics is reprinting SEA BEAR & GRIZZLY SHARK! This 48-page black and white comic book will be available August 4.

Do not go out at night: GRIZZLY SHARK lurks in these woods. There are many dangers of the deep, but none so deadly as SEA BEAR! Thrill to the adventures of these two exciting new characters, told in two full-length stories and featuring a special prose origin story written by ROBERT KIRKMAN!

The second printing of SEA BEAR & GRIZZLY SHARK, a book that Ain't It Cool News describes as having "...exceptional art and a wildly unique story you simply won't find anywhere else," will be available August 4, 2010.


Image Comics is a comic book and graphic novel publisher founded in 1992 by a collective of best-selling artists. Image has since gone on to become one of the largest comics publishers in the United States. Image currently has five partners: Robert Kirkman, Erik Larsen, Todd McFarlane, Marc Silvestri and Jim Valentino. It consists of five major houses: Todd McFarlane Productions, Top Cow Productions, Shadowline, Skybound and Image Central. Image publishes comics and graphic novels in nearly every genre, sub-genre, and style imaginable. It offers science fiction, romance, horror, crime fiction, historical fiction, humor and more by the finest artists and writers working in the medium today. For more information, visit www.imagecomics.com.
Posted by Leroy Douresseaux at 11:10 AM