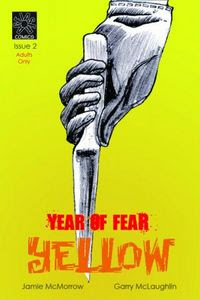 Laser Age Comics, the new small press publishing company set up by co-creators Jamie McMorrow and Garry McLaughlin are proudly announcing their latest comic book. Following The Abortion, a silent horror one shot that was released in December 2009 to great reviews, Yellow, continues their trend of playing with horror movie and literature mores, subverting original genre elements, and playing with the readers in a satisfying way.

As ever, the book is challenging and controversial, and is set through the eyes of the main protagonist, as we follow them on a murderous rampage. Although the story, written by Jamie McMorrow, is dark and dangerous, there are some moments of startling tenderness and emotion. Meanwhile, the art by Garry McLaughlin renders the action in a full-colour style the pair have christened ‘muted pop’.

To promote the comic, McMorrow has crafted a 10-minute soundtrack called Theme from ‘Yellow’ which will be distributed free with the first 100 copies. Both comic and theme will be launched at a night in Glasgow in the first week in October, with a live band playing the soundtrack to a bewildered crowd. McMorrow and McLaughlin are already generating excitement for the launch after their successful event last year which saw DJs and video footage combine in a derelict hairdresser’s to set an uneasy mood, tempered by the excitement of the crowd.

Available now through online download, and from selected comic shops from October 2nd