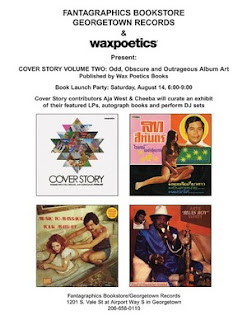 Spend a hot August night with cool music and art at Georgetown Records and Fantagraphics Bookstore in Seattle. The party celebrates the publication of “COVER STORY Volume Two: Odd, Obscure and Outrageous Album Art” on Saturday August 14 from 6:00 to 9:00 PM. Contributors Aja West and Cheeba preside over the festivities with a show of album art from the book, a book signing, and a rare combined DJ appearance.

COVER STORY Volume Two: Odd, Obscure and Outrageous Album Art, continues a graphic narration of the vibrant subculture of record collecting through the art of the album cover. This edition examines strange and bizarre record covers from across the country and around the globe, illuminating the imaginative past of twelve-inch masterpieces – sadly absent in this era of digital downloads. Published by Wax Poetics in association with powerHouse Books, this colorful 228 page volume celebrates an eccentric era when artistic visions were often so absurd and grandiose they frequently extended beyond the boundaries of the recording and onto the album covers themselves.

The artwork for the COVER STORY series is selected by the staff of Wax Poeticsmagazine, including Seattle siblings Aja West and Cheeba. Both brothers have colorful backgrounds, recording music together and separately, collaborating with an amazing assortment of players along the way. Both also associated with celebrities early in their careers: Aja as the music assistant to comedian Conan O’Brien and Cheeba with the illustrious Dust Brothers production duo. Their first recording together was a remix for the “Fight Club” film that appeared in the Japanese and European version of the soundtrack. They now play in each other’s projects: Aja’s The Mackrosoft and Cheeba’s Cheebacabra.

First published in December 2001, Brooklyn-born Wax Poetics was originally created for a concentrated market of music aficionados. It has since expanded to make musical anthropologists out of average music listeners - illuminating the dark corners of our sonic past while also striving to give new and innovative artists broad exposure.