I Reads You Review: Shrapnel: Hubris #1 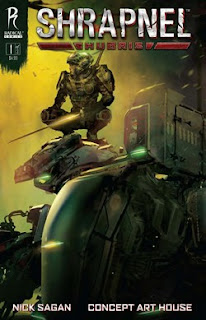 Shrapnel: Aristeia Rising was a science fiction comic book created by Mark Long and Nick Sagan and published by Radical Comics. The series depicted an insurrection that began on Venus against an oppressive government known as the Solar Alliance. In the sequel, Shrapnel: Hubris, the planetary revolution moves across the solar system.

As Shrapnel: Hubris #1 opens, Venus is the last free colony in the Solar System, but while it has yet to fall, it is unknown how much longer it can withstand the Alliance’s planetary siege and blockade against it. Under constant barrage from orbit and kept from replenishing much-needed supplies, the colonists of Venus find themselves in desperate circumstances. Now, notorious ex-marine turned surprise hero, Vijaya “Sam” Narayan leads a “black box mission” to deprive the enemy of its own critical resources. But haunted by the ghosts of her past and with squabbling among the men she leads, can Sam even reach her target, let alone cripple the Alliance supply line?

Shrapnel: Hubris is good military science fiction. It isn’t great, but it is quite intriguing – enough so that I want to read more. The painted art by Concept Art House captures the individuality of the characters and creates a murky, tech-heavy setting that reminds me of the sets from the film, Aliens. While the script by Sagan and co-writer Clinnette Minnis is good, Concept Art House’s graphical storytelling is matter-of-fact and flat. It doesn’t often capture the tension that the script suggests.

Still, fans of military science fiction may find this to be a comic book to their liking.

[This comic book includes a preview of the original hardcover graphic novel, Legends: The Enchanted by Nick Percival.]

Posted by Leroy Douresseaux at 9:28 AM