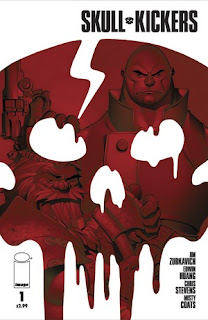 Image Comics' new series SKULLKICKERS, written by Jim Zubkavich and illustrated by profoundly talented newcomer Edwin Huang, will hit stands in September. Now, you have the chance to own original artwork from Image Comics next hit series!

SKULLKICKERS is fantasy action-comedy. Two mercenaries are entangled in a high-class assassination plot and nothing -- not werewolves, skeletons or black magic -- will stop them from getting paid. If you love movies like ARMY OF DARKNESS, SKULLKICKERS is the book for you!

Don't miss your chance to own art from the upcoming hit Image Comics series, SKULLKICKERS! Visit http://www.imagecomics.com/ for a full description of contest rules and regulations.


Image Comics is a comic book and graphic novel publisher founded in 1992 by a collective of best-selling artists. Image has since gone on to become one of the largest comics publishers in the United States. Image currently has five partners: Robert Kirkman, Erik Larsen, Todd McFarlane, Marc Silvestri and Jim Valentino. It consists of five major houses: Todd McFarlane Productions, Top Cow Productions, Shadowline, Skybound and Image Central. Image publishes comics and graphic novels in nearly every genre, sub-genre, and style imaginable. It offers science fiction, romance, horror, crime fiction, historical fiction, humor and more by the finest artists and writers working in the medium today. For more information, visit www.imagecomics.com.
Posted by Leroy Douresseaux at 10:38 AM