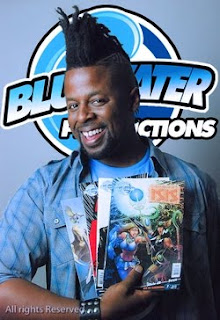 In this newly created position, Aha, 32, will have worldwide responsibility of re-purposing Bluewater's extensive library of content for theatrical, television, new media and videogame production. His position also includes the development of new titles for cross-media platforms.

Previously, Aha served as a key-producer for HOPSports Inc. where in three years he has developed and produced over thirty titles for their innovative and exclusive media distribution platform known as the HOPSports training system. During his tenure the company received honorable mention from Michelle Obama and is currently approaching Global status as a production company. Before joining HOPSports, Aha served as creative consultant for Danish Film Production company, Little Womachine, Development Executive at Stevens and Associates and has worked as a post-production marketing producer for Sony Playstation.

"Aha, brings such a diverse range of experience and knowledge of the entertainment industry that our choice to have him join the team was an easy one. He has literally done it all, which is why I know he is going to make an amazing and well-rounded creative executive. His unmatched passion for creating great partnerships, learning new skills all while exploring the full creative potential of a project will take us where we want to be." -- Darren G. Davis, CEO, Bluewater Productions

"I am truly excited about joining the Bluewater Team. Our new original I.P.'s such as Insane Jane, Nanny & Hank, 10th Muse, COOL27 and Gearz are arresting ideas with progressive commercial appeal. Bluewater is clearly on a march towards being a viable source of content for all media outlets and this is just the beginning." -- Arastao "Aha" Maree

For more information on Bluewater Productions, visit the company's Web site at http://www.bluewaterprod.com/.