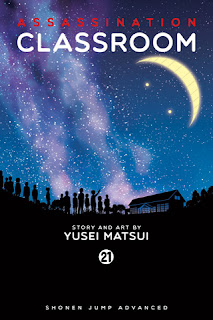 Assassination Classroom is a science fiction, comedy, and shonen manga from creator Yusei Matsui.  The series was originally serialized in the Japanese manga magazine, Weekly Shonen Jump, from 2012 to 2016.  VIZ Media published an English-language adaptation of the series in graphic novel, beginning in December 2014 and recently ending in April 2018.

Assassination Classroom focuses on the so-called “End Class.”  These are the outcast students of Class 3-E at Kunugigaoka Junior High.  They are trying to kill their teacher, and they have the perfect excuse.  Their teacher is the monstrous, alien-like octopus that recently destroyed 70% of the moon.  This creature becomes Class 3-E's teacher, whom the student name, “Koro Sensei,” and he promises to destroy the Earth after the 3-E students graduate.  Thus, it is up to these students to kill their teacher in order to save the world.  They are the “Assassination Classroom.”

[This manga contains bonus manga, “Time to Come Home,” “Time to Go to the Izakaya,” “Time to Reveal Identities,” “Time to Say Thank You,” and “Tokyo Department Store War Journal.”]

The Assassination Classroom manga has reached the end of its run.  The series is often variations of the same, although the usual is usually quite entertaining.  It is like a sitcom about students learning to become assassins while trying to kill their other-worldly teacher, and creator Yusei Matsui finds comedy in characters as well as in situations.

Posted by Leroy Douresseaux at 5:21 PM