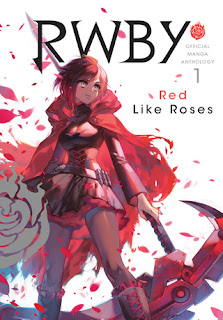 Based on the animation from Rooster Teeth Productions; RWBY created by Monty Oum

“RWBY” is an American animated series that is streamed on the World Wide Web.  “RWBY” was created by the late Monty Oum for Rooster Teeth Productions (an American company), which is known for its streaming and web animated series.  “RWBY” is produced in a Japanese anime style, although some consider it to be an actual anime series.  It is the first western-produced anime series to be distributed to Japanese television.

“RWBY” is set on the world of Remnant, which is beset by “Grimm,” horrific monsters bent on the destruction of humanity.  The kingdoms of Remnant have risen to combat these monsters by training powerful Huntsmen and Huntresses at academies around the planet. “RWBY” focuses on Ruby Rose, Weiss Schnee, Blake Belladonna and Yang Xiao Long, four such Huntresses-in-training who are collectively known as “Team RWBY.”

Shiwa Miwa, the creator of the manga Dogs and Dogs: Bullets & Carnage, produced a manga based on “RWBY” and entitled RWBY.  It was published in graphic novel form by VIZ Media in January 2018.  Now, VIZ is introducing RWBY The Official Manga Anthology, which will publish original short manga and comics set in the world of RWBY that showcase the members of Team RWBY

RWBY The Official Manga Anthology, Vol. 1 is subtitled “Red Like Roses” and focuses on Team RWBY leader, Ruby Rose.  The stories reveal that Ruby has insecurities just like everyone else, although she is a Huntress team leader.  While her worries run deep, Ruby is determined to overcome her shortcomings in order to be a true hero.  From working with other teams to taking on evil clones, Ruby is driven to be the best... even if it means she has to change her hair color.

[This volume contains commentary one-panel cartoons from the cartoonists that contributed to this volume.  It also includes “Message from Ein Lee” and “Message from Lindsay Jones.”]

I had not heard of “RWBY” until I received a VIZ Media press release that it was going to publish Shirow Miwa's 2015-2017 manga adaptation of the anime.  As I wrote in a previous review, I was not interested in reading it, but my VIZ Media rep gave me a copy.  However, I was looking forward to the RWBY The Official Manga Anthology manga, VIZ Media came through.

RWBY The Official Manga Anthology Graphic Novel Volume 1 is a little more entertaining than the first RWBY graphic novel.  That is mainly because the stories are mostly humorous.  They are lighthearted vignettes that focus on the relationships between the members of Team RWBY.  Ruby Rose is the emphasis in these tales, but her teammates star in most of the stories here and are featured almost as much as she is.

RWBY The Official Manga Anthology Volume 1 – Red Like Roses is a good way to let readers learn more about the characters via comedy and teamwork.  Most of these stories are about 10-pages in length.  According to the press release that accompanies this first volume's release, the mangaka (creators) that contribute to this anthology are new artists, and it shows in the fact that these stories feel like amateur press comics or “dōjinshi.”  These stories are fun, but I miss the fantasy-horror-action mix of the previous RWBY manga.  Still, I think Red Like Roses will serve to make new RWBY fans just because of the friendly nature of these stories.

Posted by Leroy Douresseaux at 5:37 PM