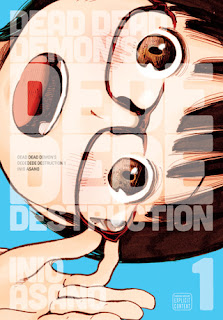 Dead Dead Demon’s Dededede Destruction is seinen manga (comics for adults) from creator (mangaka), Inio Asano (Goodnight Punpun).  Beginning in April 2014, the manga is being serialized in the seinen manga magazines, Big Comic Spirits (Shogakukan).  VIZ Media is publishing the manga in English in North America as a graphic novel series under its “VIZ Signature” imprint in both print and digital formats.

Dead Dead Demon’s Dededede Destruction is about the life mundane and an alien invasion.  On August 31st – also known as 8/31 – three years ago, an alien mothership arrived on Earth and parked itself above Tokyo.  Now, the impending doom is starting to feel like an ordinary thing.  Kadode Koyama and her best friend, Ontan Nakagawa, track the aliens movement with enthusiasm and study for college entrance exams with less enthusiasm.

Dead Dead Demon's Dededede Destruction, Vol. 1 (Chapters 1 to 8) introduces two high school students who are longtime friends.  Kadode has a mad crush on their teacher, Mr. Watarase, and Ontan is really tired of the rest of humanity.

Meanwhile, conventional weapons have not done anything to defeat the aliens.  The Japanese Self-Defense Force (SDF) now has a new weapon, a green weapon, that will not contaminate the city the way another weapons have.  Kadode and Ontan monitor the situation closely on social media, but they still have their own teen melodramas upon which to focus.

[This volume includes an “extra” chapter.]

The Dead Dead Demon's Dededede Destruction manga is a strange one.  This is, however, the work of Inio Asano, and his strange is usually a very good strange.

Dead Dead Demon's Dededede Destruction Graphic Novel Volume 1 is more about the comedy-drama of Kadode and Ontan than it is an alien invasion genre drama.  This manga is like Independence Day mixed with a tame, teen girl spin on the film, Superbad.  It is odd and offbeat, but I really want to read more Dead Dead Demon's Dededede Destruction.  You never know where Asano will take his narratives, but you will realize (eventually) that you are really, really glad that you are following the highways and byways of his storytelling.

Fans of the manga of Inio Asano will want to read the VIZ Signature title, Dead Dead Demon's Dededede Destruction.

Posted by Leroy Douresseaux at 5:37 PM