Review: BUG! The Adventures of Forager #1 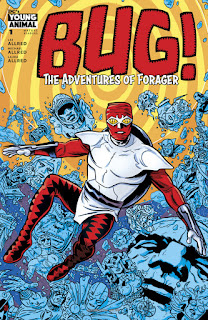 The Bug and Fourth World characters created by Jack Kirby

Forager is a DC Comics character that first appeared in New Gods #9 (cover dated:  August 1972).  Created by writer-artist Jack Kirby, Forager was a character in Kirby's “Fourth World” universe.  Forager's people were a society of humanoid bugs that thrived in colonies built beneath the surface of the planet, New Genesis.  Forager lived among these beings, but was apparently really not one of them.  The character was later killed in DC Comics' Cosmic Odyssey (1988) miniseries.

Bug! The Adventures of Forager #1 (“Domino Effect”) opens with Forager finding himself alive again!  After he meets “Ghost Girl” and her teddy bear, Forager learns that he might be dreaming, but can a corpse dream?  Then, there are the weirdies and beasties and... The Sandman.

I have had mixed feelings about Mike Allred's comics over two decades+ reading them, but I like Allred's touch with the more eccentric Jack Kirby characters, such as Allred recent run, with Dan Slott, on Marvel Comics' Silver Surfer, a classic Kirby character.  There is such delightful kookiness in Bug! The Adventures of Forager.  I liked it so much that I wanted to read the next issue right away, and that is one of the highest compliments I can give as a comics reviewer.  I am also going to do something I don't always do – give a grade to a first issue.

I implore you to try at least this first issue.

Posted by Leroy Douresseaux at 7:37 PM