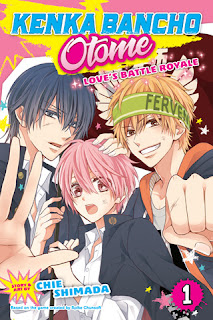 Kenka Banchou is a series of video games that debuted in Japan a decade ago for the Playstation Portable.  The games follow the efforts of a male “bancho” (delinquent) to beat up other delinquents.  Manga creator, Chie Shimada, created a manga, entitled Kenka Bancho Otome: Girl Beats Boys, based on the game, but it focused on a female character as the lead.  VIZ Media is publishing that manga as a two-volume graphic novel series, entitled Kenka Bancho Otome: Loves's Battle Royale, under its “Shojo Beat” imprint.

Kenka Bancho Otome: Loves's Battle Royale, Vol. 1 (Chapters 1 to 4) introduces Hinako Nakayama, an orphaned girl who is about to start her first day at the all-girls school, Kotobuki Girls' High School.  However, she accidentally bumps into a teen boy whose face looks just like her's.  His name is Hikaru Onigashima, and he is her long-lost twin.  Hikaru demands that because Hinako has hurt him, she must disguise herself to look like him and attend the opening ceremony at his new school, Shishiku Academy, an all-boys school of delinquents – who fight all the time!

One might think that a girl has no chance of surviving a school where delinquent boys fight each other to be the #1 boss of his year.  Hinako is full of surprises, and so are some of the boys she meets.

The Kenka Bancho Otome manga has a familiar premise.  After all, dear readers, I just recently guided you through the shojo manga, So Cute it Hurts!!, from mangaka Go Ikeyamada.  That manga followed a twin brother-sister pair that looked identical, or whose faces looked close enough that they could pose as each other.

Kenka Bancho Otome: Loves's Battle Royale Graphic Novel Volume 1 introduces a similar plot of look-a-like twins taking each others place at school, in which the girl must play the tough.  The difference is that in Kenka Bancho Otome, its star female lead is actually quite capable of defending herself against bad boys.  However, the character writing in Kenka Bancho Otome is not as strong as it is in So Cute It Hurts!!

The male supporting characters have potential, but none of them really steps forward as a breakout male antagonist.  Hinako's brother, Hikaru, barely registers as a character; it is almost as if he is merely a throwaway piece used to explain how a girl ends up in an all-boys school.  Still Kenka Bancho Otome is a fun read, and this first volume does end with a tease of a new adversary for Hinako.  That plus Chie Shimada's beautiful art make this worth another look.  Fans of switched-identity shojo manga will want the Shojo Beat title, Kenka Bancho Otome: Loves's Battle Royale.

Posted by Leroy Douresseaux at 5:23 PM