Review: THE MAN FROM THE GREAT NORTH 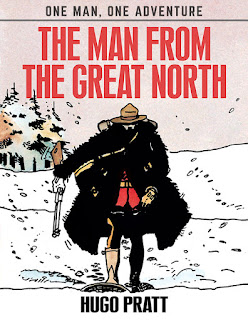 IDW Publishing is currently publishing new English-language editions of Pratt's graphic albums and comics.  One of those is a full-color graphic novel, The Man From the Great North.  It was initially entitled Jésuite Joe and was serialized in the French comics magazines, Pilote.  Jésuite Joe was then collected as a graphic album in 1980 in France (by Dargaud).  In Italy, it was published as L'uomo del grande nord (The Man From the Great North) and was one of four graphic novels that Hugo Pratt contributed to Italian publisher Edizioni Cepim's “One Man, One Adventure” series.

IDW's The Man From the Great North also has five pages of watercolors studies and five spot illustrations that Pratt produced for Jésuite Joe.  Pratt also produced 19 pages of a second Jésuite Joe story that he never finished, and that is reprinted in this book.

The story focuses on Jesuit Joe, who is a “Métis,” an ethnic group in Canada and part of the United States that is descended from indigenous North Americans (Native Americans) and European settlers.  In Joe's case, he is of French-Canadian (father) and Mohawk (mother) descent.

The Man From the Great North's story takes place in 1912 in Canada (the “Great North”), and for most of the story, Joe is dressed in the uniform of a Royal North West Mounted Police (RNWMP), specifically a corporal's uniform.  Joe finds the uniform in a cabin shortly before he kills two men who hat shot into the cabin.  Next, he encounters a Cree medicine man in the middle of some kind of ceremony involving a baby stolen from white settlers, and Joe kills him.

Thus, begins Jesuit Joe's spree of killing and violence that includes a Catholic priest, family, Indians, and the man who is tracking him, Sergeant Fox, among others.  All the while, Jesuit Joe is looking for something... something ephemeral... or absolute.

In his essay, “Whatever became of Jesuit Joe?”, Gianni Brunoro writes that Hugo Pratt “...was interested in telling stories about ideas.”  Brunoro writes that Jesuit Joe may have been “an ideologically completed story,” so for Pratt, there was nothing to which he should return.  Something else worth noting:  in his forward to Jésuite Joe, written in 1991, Pratt talks about writers who influenced this creation, including Jack London and Zane Gray.

For me, Jesuit Joe seems like an idea, a story about a guy going through the wilderness of the “Great North,” killing people at just about every stop because that is what he does.  His motivation is inscrutable, unless a reader wants to admit that Joe does things simply because he wants to do those things.  He is simultaneously ephemeral, a force of nature, and a personification of death.  One can see that this story and character seem like ideas inspired by the works of Jack London.

The story in The Man From the Great North is impressionistic and is told in illustrations that are abstract when they are not treading the ground of realist art.  The influence of the great American cartoonist, Milton Caniff, is evident on The Man From the Great North, as it is on Pratt's Corto Maltese series.  The storyboard pages are loose and seem immediate and relevant, but do not show the influence of any particular artist or writer.  They seem like pure Pratt.

This story, with its wraith-like character who wanders a sometimes dream-like wilderness landscape, seems to me to be about inspiring the reader's imagination.  Pratt seems to tell us to follow Joe and make of it what our imaginations will.  I find that this story does indeed arouse my imagination, and I cannot help but be intrigued and emotionally involved in it.  The violence (murder, kidnapping, assault, rape, etc.) moves me.  I feel something... and some things I should not admit...

There will be no more Jesuit Joe by Hugo Pratt.  I want more because this story moves me.  There is no beginning, middle, and end in a traditional way; in fact, The Man From the Great North seems like a small section of a larger story.  Like Pratt's other work, this is a work of graphic fiction and graphic storytelling that grabs the reader in ways that larger, more developed comics do not.  That is the reason why Pratt is always worth reading, but concerning Jesuit Joe, this is the end.

[This book includes a forward by Hugo Pratt, and an essay, “Whatever became of Jesuit Joe?” by Gianni Brunoro.]

Posted by Leroy Douresseaux at 5:58 PM