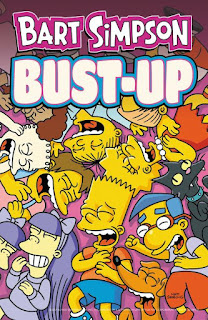 Bart Simpson is a character on the animated television sitcom, “The Simpsons,” produced first run for the Fox Broadcasting Company.  “The Simpsons” present a satirical depiction of a working class family which consists of Homer Simpson (the father), Marge Simpson (the mother), Bart (the oldest child and only son), Lisa (the precocious and brilliant elder daughter), and Maggie (a baby girl).  “The Simpsons” also parodies American culture, pop culture, society, politics, media, etc. via the denizens of The Simpsons home town, Springfield.

In 1993, Matt Groening (creator of “The Simpsons”), Bill Morrison, and Steve and Cindy Vance founded Bongo Comics Group (or simply Bongo Comics).  Over the course of a quarter-century, Bongo Comics has published numerous comic book series and single-issue publications based on “The Simpsons.”  The comic books have starred and featured all the characters that are part of this franchise, from the Simpsons clan to the various supporting characters, including Ralph Wiggum and his father, Chief Wiggum; Bart's pals, Milhouse and Nelson; Ned Flanders; and Principal Seymour Skinner, to name a few.

Bart Simpson Bust-Up opens with “Everybody Really Hates Bart,” and it is Bart's fault after one of his pranks creates a nightmare right out of a horror movie.  Then, Bart is the victim of Lisa's sociological experimentation in “Decisions, Decisions.”  It is a disaster of shoe proportions in “There's No Business Like Shoe Business,” with a little help from baby genius, Maggie Simpson.

Bart and Milhouse go “Into the Woods,” showing that these two boys are not scout material.  Bart, Milhouse, and Nelson are among the boys trying to impress the “New Girl in Town.”  Bart uses old coupons and causes a disaster in “ For a Limited Time Only.”  Finally, Bart uses all his wiles to bring comfort to his family in “Railroaded.”

Harper Design has been sending me review copies of its Simpsons trade paperback originals for the past few years.  Bart Simpson Bust-Up is the fourth one they have sent me, and I am delighted to say that it is the best.  That is saying a lot because I really liked the previous three Simpsons collections that I read.

Bart Simpson Bust-Up is filled with stories that are funny (obviously), but are also imaginative and inventive.  “Good Cop, Bart Cop” (story by Ian Boothby and art by John Delaney and Andrew Pepoy) is funny in a way that recalls the best entries in the Lethal Weapon film franchise (the first two).  “Into the Woods” has a killer “special bonus” panel to end the story.  No two stories are the same; each one is a surprising and novel treat.


The text is copyright © 2018 Leroy Douresseaux. All Rights Reserved. Contact this blog for reprint and syndication rights and fees.

Posted by Leroy Douresseaux at 5:08 PM