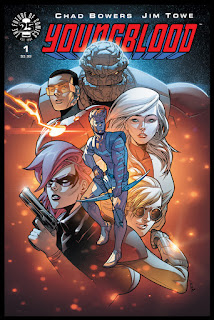 Youngblood Reborn – Chapter One: “What Happened to Man-Up?”

The series has been discontinued and revived a number of times, and on this, the 25th anniversary of Image Comics, we have the new Youngblood.  It is written by Chad Bowers; drawn by Jim Towe; colored by Juan Manuel Rodriquez, and lettered by Rus Wooton.

Youngblood #1 (“What Happened to Man-Up?”) begins with a young woman named Petra Gomez, and she is looking for her missing friend, Horatio, who is also the budding superhero, Man-Up.  Petra is also a budding superhero, who is known as “Gunner,” although she may be the new “Vogue.”  Her search and superhero activity will bring her into the circle of a few original members of the famous and infamous superhero team, Youngblood, perhaps, sooner than she wished.

Rob Liefeld took over two years and a half years to publish the original 11-issue run on Youngblood (#1-10 and a #0 issue).  I did not stick around that long, as I could not stomach Youngblood after four issues because it was such a terrible comic book.  I was absolutely crazy for writer Alan Moore and artist Steve Skroce's aborted run on a revamped Youngblood, published in early 1998.

Chad Bowers and Jim Towe's new Youngblood falls in the huge space that is between the quality of the Liefeld and the Moore/Skroce Youngblood series.  It is not as bad as Liefeld's run, nor is it anywhere near as good as the Moore/Skroce run.  Towe is good at storytelling, but his compositions lack polish and professionalism because he should not ink his own pencils, which is what he does on this first issue.  Towe could use a veteran inker, which would vastly improve the visual quality of the art.

Chad Bowers story is not great or really good for that matter.  However, Bowers' writing is not anywhere near the worst of Youngblood storytelling, and actually interests me enough that I will seek out at least one more issue.  Truthfully, if Bowers and Towe are up to it, they could produced a quality, long-running Youngblood series.  These two creators have potential, but Rob Liefeld and (I imagine) sales/finances may ultimately decide the fate of this latest Youngblood series.

[This comic book includes the bonus story, “As It Should Be” - story by Rob Liefeld; art by Liefeld (pencils) and Shelby Robertson (inks); colors by Juan Manuel Rodriguez; and letters by Rus Wooton.]

Reviewed by Leroy Douresseaux a.k.a. "I Reads You'


The text is copyright © 2017 Leroy Douresseaux. All Rights Reserved. Contact this blog for syndication and reprint rights and fees.


Posted by Leroy Douresseaux at 5:11 PM