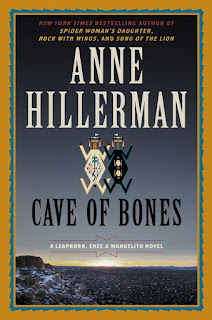 [This review was originally published on Patreon.]

Cave of Bones is a 2018 novel from author Anne Hillerman.  It is the fourth novel in the “Leaphorn, Chee & Manuelito Series,” which began with Spider Woman's Daughter (2013).  This series is a continuation of the “Joe Leaphorn and Jim Chee Series” written by Hillerman's late father, bestselling author, Tony Hillerman (1925-2008).  In the new novel, Navajo Tribal cops, Jim Chee and Bernadette “Bernie” Manuelito, investigate missing men, pilfered funds, and desecrated graves, and again call on the assistance of the now-retired Joe Leaphorn.

Cave of Bones finds Tribal Police Officer Bernie Manuelito paying off a favor by agreeing to speak to the young people who are participating in “Wing and Roots,” an outdoor character-building program for at-risk young people.  Bernie arrives at the site of the program in the Ramah Navajo district, and she finds chaos.  Annie Rainsong, a young participant, is missing.  When Bernie and Rose Cooper, the program's director, find Annie, the girl is clearly traumatized.

Although Annie has returned, Domingo “Dom” Cruz, a beloved instructor who went searching for Annie, is now missing in the wilderness that is the volcanic landscape known as El Malpais.  In addition, Annie tells Bernie that she found a cave with bones inside, and Bernie fears that Annie may have disturbed a Navajo burial site – a no-no in several ways.  Now, Bernie finds herself caught up in the search for Dom, ensnared in the politics surrounding Wings and Roots, and forced to confront the face of true human evil

Meanwhile her husband, Sergeant Jim Chee is in Sante Fe at the New Mexico Law Enforcement Academy for training, where he is forced to confront troubles from home.  Bernie's sister, Darleen (Jim's sister-in-law), is also in Sante Fe, attending the Institute of American Indian Arts (IAIA) and taking part in the college's program for prospective art students.  Darleen is an especially gifted artist and illustrator, but her boyfriend, Clayton “CS” Secody, who is also attending the college, is working with Clyde Herbert, a vengeful man Chee sent to prison for domestic violence.  Chee also discovers something troubling about CS, and now the Navajo police sergeant must balance police work and family and use his medicine man training to discover the truth behind Darleen's latest troubles.

Previously, readers had to wait two years in between “Manuelito, Chee & Leaphorn” novels.  I was delighted to find that only a year after the release of the third book, Song of the Lion, the fourth book, Cave of Bones, was to arrive.

I have praised the previous novels to the high heavens because I loved reading them.  I sometimes stopped reading in the middle of the books just so that I wouldn't get to the end.  That's crazy, right?  When I get to the last page of each “Manuelito, Chee & Leaphorn” novel, I feel that I am unwillingly leaving my friends.

Anne Hillerman makes the characters seem so real.  They are frail, imperfect, and bittersweet – like us real folks.  Hillerman's fantastic stories of murder, mystery, family drama, and the Navajo could be just another genre house.  And as the late Luther Vandross said, a house is not a home.  However, Hillerman's complex and marvelous characters make her novels a welcoming home for readers.

Crawl in caves with Bernie.  Confront the reality of a reformed man.  Deal with a vociferous tribal councilman who is also a pushy mother.  Comfort a troubled teen.  I also found myself wanting to crawl into the lives of the new and supporting characters, from the troubled Merilee Cruz and Michael Franklin to the irascible Elsbeth Walker and the... sinister ones.

Kudos to Anne Hillerman for making it clear that Navajo fictional characters can be as interesting and as lovable as classic mystery novel characters.  And Cave of Bones... it is simply a pleasure to read.  It is Hillerman's best novel yet, and maybe the best is still to come.


The text is copyright © 2018 Leroy Douresseaux. All Rights Reserved. Contact this blog for reprint and syndication rights and fees.

Posted by Leroy Douresseaux at 5:04 PM