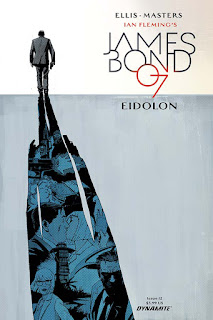 “James Bond” is the fictional British Secret Service agent created by Ian Fleming, a British writer and novelist.  Fleming introduced James Bond in the 1953 novel, Casino Royale, and featured the character in 12 novels and two short-story collections.  Of course, most people know Bond because of EON Productions' long-running James Bond-007 film series, which began with the 1962 film, Dr. No.

Over the past 50+ years, Bond has made sporadic appearances in comic books, and the latest Bond comic books come courtesy of Dynamite Entertainment.  James Bond, Volume 1 is written by Warren Ellis, drawn by Jason Masters, colored by Guy Major, and lettered by Simon Bowland.  Vol. 1 comprises two story arcs, with the second entitled “Eidolon.”

“Eidolon” began with a man named Mr. Hawkwood doing a little killing because someone exposed “Eidolon.”  On the 007 side of things, James Bond arrived in Los Angeles.  His mission was to extract fellow MI6 agent, Cadence Birdwhistle, from the Turkish Consulate.  Her cover was blown, and it was too late to fix things.  “Eidolon” turned out to be a stay-behind cell of the infamous SPECTRE, and now it had infiltrated the homeland protecting part of British Secret Service, MI5, which was out to put its foreign service counterpart, MI6, out of business.

As James Bond, Volume 1, #12 opens, Mr. Hawkwood initiates the endgame of his plot against MI6.  With most of his cell gone, he eschews subterfuge and goes directly at his enemy.  And he may be a bit too tough even for MI6 agent-extraordinaire, James Bond, to handle.

With that final panel of Bond having a smoke and simply saying “No,” Warren Ellis' run on Dynamite's James Bond comes to an end.  Even the cover art for issue #12 by Dom Reardon, with Bond striding into the background, his back to the viewer, says goodbye.  Bond's shadow casts a montage of images from “Eidolon.”  Maybe, Ellis has written Bond out of his system, but I hope for more Ellis Bond at some nebulous later date.  “Eidolon” has such an abrupt ending, so I think that the conclusion was rushed when it certainly could have breathed for at least another half-issue.

However, I have praised Ellis enough during his Bond run, and now, it is time to praise his artist and collaborator on “Vargr” (the first story) and “Eidolon,” Jason Masters.  I don't thing these two story arcs would work quite as well as they do without Masters.  His crisp, clean compositions and his ability to design pages that maximize action in a series of connected static images marks Masters as a masterful comic book storyteller.  Those skills turn “Eidolon” into a bracing, page-turning read.  I hope to see more of Masters soon, and I would hope Dynamite considers him as the go-to-artist to make other writers' Bond comics really work.

[This comic book includes an advanced preview of James Bond: Felix Lieter, written by James Robinson; drawn by Aaron Campbell; colored by Salvatore Aiala; and lettered by Simon Bowland; with a cover art by Mike Perkins and Andy Taylor.]

Posted by Leroy Douresseaux at 6:16 PM