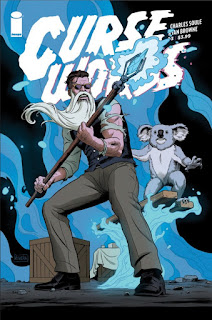 Curse Words stars Wizord, a wizard from another world who appears one day in New York City, specifically Central Park.  Of course, the first people to encounter him end up in an unfortunate situation, but eventually Wizord is seen as the city's “sorcerous protector.”  A confrontation with a murderous rival, however, made Wizord do something terrible to the city, and now, he has to come up with an incredible fix-it.

Curse Words #3 opens on the Hole World where Ruby Stitch prepares for her assault on Wizord.  First, however, she has to complete a mission for her boss, Sizzajee.  Meanwhile, Wizord is drowning his trouble in alcohol at the local watering hole because he recently was stripped of his powers.  His familiar, Margaret the koala, has a plan, though...

Curse Words instantly impresses with its eye-popping art.  Still, I have been waiting for this series to fall on its visually striking face, and this issue, it finally did!  Naw, it didn't.  I just love this comic book even more.  Every page simply makes me want to hurry to the next page.  I am sure that some people see this on the shelves and think that it looks too weird.  Judge a book by its cover; weird is good , and Curse Words is a fantasy and magic comic book worth having.

I still think Curse Words could be a standout title.  It might already be...


The text is copyright © 2017 Leroy Douresseaux. All Rights Reserved. Contact this blog for syndication and reprint rights and fees.

Posted by Leroy Douresseaux at 7:06 PM